The days are short, the nights still long and the festive period is over. As millions of people returned to their virtual offices this week, how many were dreaming of an imminent lottery win – a life-changing windfall that might facilitate the purchase of a holiday home in the sun or, even better, a racehorse to warm our hearts during the remaining weeks of Winter?

When England’s first ever lottery was drawn, four-hundred and fifty-three years ago next Tuesday, the purpose was to raise funds to defend Britain from the threatening presence of the Spanish in the Netherlands. Queen Elizabeth I granted a royal charter to collect monies for “the reparation of the havens and strength of the realm” – including nearly £130,000 worth of defensive walls that were eventually built around the harbour town of nearby Berwick-upon-Tweed.

Four-hundred thousand lottery tickets were issued with a price tag of ten shillings each. The top prize was worth £5,000 including £3,000 in cash, £700 in silver-plated trinkets, and the remainder of the value in ‘good tapestry’ and the ‘highest quality linen.’

In an ingenious bid to target the ill-gotten gains of thieves and fraudsters, criminals were granted a seven-day amnesty against arrest when entering the larger towns to purchase tickets.

It was such a brilliant idea that I’m considering the launch of a similar initiative to raise funds for a new Weighing Room complex at Kelso. Prizes could include a fat wad of cash (Elizabeth’s lottery was intended to return roughly 25% of the value of the stakes in prizes), an old trophy and a set of number cloths. I’ve a meeting with the police next week and I’m sure they can be persuaded about the whole amnesty thing…

The idea of a lottery resonates in racing, partly because we’re an optimistic bunch, but also because Lottery was the name of the horse credited with winning the first ‘real’ Grand National in 1839 (there were three earlier runnings but they don’t count because, until Lottery won the race, the event failed to capture the public’s imagination). 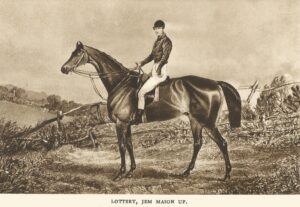 Such was Lottery’s reputation that, much as the top horses do nowadays, he tended to scare away all opposition. Eventually some race planners resorted to drafting race conditions specifying that valuable stakes races were “Open to all horses, except Mr Elmore’s Lottery.” Timeform ratings weren’t invented for another hundred years and comparisons with modern day steeplechasers are impossible, but a contemporary commentator declared that Lottery was, “The best horse that ever looked through a bridle, combining as he did speed, stoutness, ability to go through dirt and to carry weight, extraordinary power of jumping and quickness over his fences.”

The racing enthusiast’s lottery has nothing to do with buying a ticket that contains a series of random numbers. Instead, it must contain the names of several horses – like Navajo Pass our selection in the 3.35 at Sandown on Saturday. Ideally there should be at least half a dozen horses named – each with the potential to match the ability of the winner of the 1839 Grand Liverpool Steeplechase and destined for one of the key ante-post betting races at the Cheltenham Festival in March.