I feel as though I might be stuck in Groundhog Year. As New Year’s Day approaches in Scotland, we’re not permitted to have a proper crowd at the races, the Government is still telling us how many friends we’re permitted to meet at any one time and the news is full of doom and gloom.

Just like last year, I’ll make a collection of resolutions – some of which I’ll stick to, some of which I’ll recommit to in the next Groundhog Year, presumably until I wake up in bed one morning next to the actress Andie MacDowell. 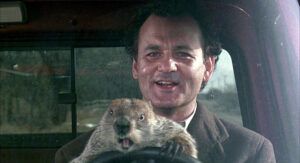 In the past twelve months I started running a little faster for further, though not as fast or as far as I did 35 years ago (after all, Groundhog experiences are about being trapped in a repeating cycle of time – not reversing the aging process). Unlike Bill Murray, the main character in Groundhog Day, I have not yet mastered the piano. Nor have I stolen a car, robbed a bank or saved anyone’s life using the Heimlich manoeuvre.

Later tonight I’ll consider whether any of those things should be on my list of resolutions for 2022, although I think we can probably put a line through ever learning how to play the piano…

We have already committed to a few enhancements at Kelso Racecourse over the next twelve months, notably in respect of the race programme. Total prize money for the year will increase to £1.5 million – more than we’ve ever been able to put up before. The most valuable race, the bet365 Morebattle Hurdle on Saturday 5th March, will increase in value by 33% to £100,000 – plus there will be the same £100,000 bonus, won by The Shunter last year, if the winner can follow up in any race at the 2022 Cheltenham Festival.

Three weeks later, on Saturday 26th March, three new race series will culminate in finals at Kelso. The Cab On Target 2½ mile Handicap Hurdle Final and the Jodami National Hunt Flat Race Final are both part of the Racing Post Go North series of races carrying £30,000 of prize money each. Qualifiers will be staged at racecourses throughout the North. Meanwhile, the Herring Queen Mares Novices Hurdle Final will carry a prize fund of £50,000 and will be open to mares qualified in races staged throughout the whole of Britain.

Subject to Levy Board funding remaining consistent throughout the year, all Class 3 chases and handicap hurdles at Kelso will be advertised at £15,000 or more, while all Class 4 chases will be worth £10,000 and Class 4 hurdle races £9,000. Class 5 chases and hurdles will be worth £7,500 and £7,000 respectively. While hunter-chases will be subject to a separate rate-card, the course’s Corinthian Cup will increase in value to £12,000.

I’m pretty sure I’ll tip more winners in the Border Post next year as well, starting with Pileon at Cheltenham on New Year’s Day. I know what you’re thinking – you’ve heard it all before. What can I say – Happy Groundhog Year!