Long suffering readers will remember the beautiful pair of Oystercatchers that we christened Brian and Gillian on account of their long residency at the racecourse. Their first appearance in this blog was on Valentines Day, 2020, when they flew in for their annual visit and nested in their usual place on the roof of the Doody Room overlooking the track.

Breeding pairs of Oystercatchers have been known to return to the same site together for upwards of twenty years, so it was no surprise to see them again and again. Their delightful long tweets, like a series of dashes in morse code, became a welcome harbinger of the Spring to come.

But then the roof of the Doody Room developed a leak. Well… in fact it had been leaking for a few years, but the leak got worse and we were left with two options: we could either repair the roof or repurpose the Doody Room as the new jockeys’ shower.

So we called in our good friend Mr Cassie the joiner, who replaced the tar and gravel roof with one made from corrugated sheets – a great example of one of those necessary financial outlays that sadly provides no perceptible benefit for racegoers at all. Secretly I felt very guilty indeed. Of all the things that kept me awake at night – like lockdowns, races without racegoers, and wondering whether the weekly selection would win (this week we’re going for Return Ticket in the Perth Silver Cup on Sunday), the fate of the Oystercatchers trumped the lot.

Where would Brian and Gillian nest, I thought, if they couldn’t disguise their eggs amongst the gravel? What if I’d ruined their chances of breeding? Or even evicted them from the racecourse? 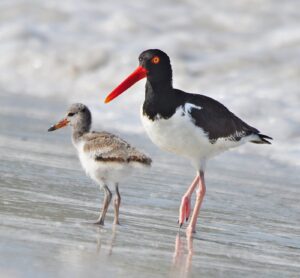 I needn’t have worried. Last year we welcomed two breeding pairs. This year we had four. As chance would have it, we’ve done the Oystercatchers a great favour. Most years we’d discover at least one chick that left the nest too early. They’d attempt to fly from their vantage point above the track, totter to the edge of the roof and plummet to their death on the concrete steps below. Now that the roof is no longer attractive, they nest safely on the ground and successfully rear more chicks as a result.

Once the chicks are older, Oystercatchers from all over the area gather together like teenagers at a loose end – strutting their stuff in their neat black and white plumage. Presumably they’re getting ready to fly off to wherever Oystercatchers go to in the Winter.

On Monday, amongst a cacophony of excitable tweets, I counted thirty-six Oystercatchers on the track near the second-last steeplechase fence. The place has become a veritable Oystercatcher sanctuary and the replacement of the Doody Room roof one of the canniest conservation projects in Kelso.