At first I was a bit sceptical about John Gosden’s use of the word ‘sabbatical’ when explaining why Frankie Dettori wasn’t jocked-up for the stable’s rides last weekend. It sounded a bit like the occasion that I was given a sabbatical after breaking multiple pieces of farm machinery during a summer student-placement. Only I’m pretty sure the word used by the farmer was ‘sacked’…

But Gosden is an educated man and he’ll have realised that the etymology of the word sabbatical is that, during the late 16th Century, it was used as an adjective meaning ‘recurring in sevens or on every seventh (day / week / year)’. This blog could be described as sabbatical, as could my weekly joint of roast beef and my Friday night bath; although the word is more commonly linked to the Sabbath, as in the seventh day in religious observance – from the Latin: sabbatum.

Other things that come in sevens include: musical notes on the minor scale, rugby teams appearing in the local Melrose tournament, and Harry Potter books (as long as you don’t count the one that’s performed as a play). The seventh wave, according to a legend perpetuated in song by Sting, is supposed to be the largest swell upon the ocean.

By the 20th Century, the word sabbatical was being used as a noun meaning ‘a year’s absence granted to researchers’ – originally granted as one year in seven to university professors. The idea of the ‘sabbatical year’ was probably inspired by Moses who decreed that every stretch of agricultural ground should be left fallow and untilled once every seven years – a sensible precaution which mitigated against the perpetuation of pests and disease. 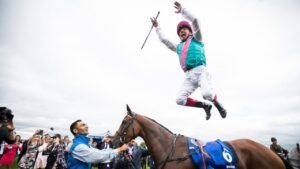 The winning partnership between Gosden and Dettori blossomed seven years ago, in 2015, when Frankie rode Golden Horn to victory in five races including the Epsom Derby and the Coral Eclipse at Sandown. The pair struck again in the Coral Eclipse, which is run this weekend, with Enable – who won fourteen races under Dettori including the Oaks of 2017 and two runnings of the Prix de l’Arc de Triomphe. Other famous wins came with Cracksman, Palace Pier and Stradivarius.

So, after seven super years, is it not appropriate to take a break in 2022? It could allow space for the Gosden-Dettori team to recharge awhile, ahead of another seven-year spell at the top. Time will tell…

Meanwhile, it feels like it’s been seven years since the last winning blog-tip. It’s certainly been more than seven weeks. Sir Michael Stout has enjoyed six Eclipse winners, but has been training for 50 years – which means he’s probably overdue a seventh: this week’s selection is Bay Bridge.