It is with huge sadness, this week, that I have to report the death of the Kelso Poop Fairy.

No one actually knows the cause of her demise, but there’s a strong suspicion that it might have been Covid – mainly because of the notable uptick in dog poop evident in the racecourse car park that coincided with the beginning of the first lockdown. This suggests that the Poop Fairy may well have been suffering from an underlying medical condition, possibly a complication caused by campylobacter – an unpleasant bacterial infection that can be picked up from dog faeces, with symptoms that include severe abdominal pain and bloody diarrhoea or worse if you’re particularly unlucky. 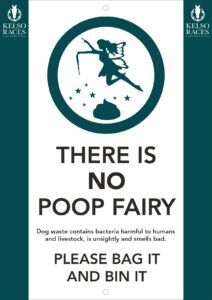 In addition to the increasing use of the field by the local community as an area for walking dogs, the car park has recently hosted activities for local youth groups, pigeon fanciers and dog agility classes. All of which is lovely until one of those users steps in poop and complains to the racecourse office.

In just less than four weeks’ time we’ll be welcoming spectators back to the racecourse and we’re hoping the car park will be full. That’s full of people and cars, not full of dog crap – just in case anyone is still in any doubt about the point behind this week’s blog post (or should that be this week’s doggy ‘bog’ post?).

I’ve yet to speak to a dog owner in the car park who hasn’t told me that they always, always, pick up their dog’s poo. But what, I believe, a small proportion of them really mean is that they pick it up as and when they witness their dog in action. Unfortunately there are quite a few who are scrolling through their mobile phones or looking determinedly ahead, while their dogs squat in the grass fifty yards behind them.

Bins are provided in the car park, which are emptied by our grounds team into skips – for which the racecourse is charged at a rate dictated by the weight of the waste. Which means that we are quite literally paying for other people’s shit.

We’re not complaining – it’s a valuable service and I’ve often heard people say, “Where there’s muck, there’s money.” It’s just that I was always led to believe the saying was about money in, not money out. In that respect I suppose it’s only the same as the Border Post’s weekly tips… Saturday’s selection is Humanitarian in the Ebor at York.

We love dogs at Kelso Racecourse and we really are always pleased to see them, especially on racedays when dogs are permitted into the public enclosures as long as they are kept on leads. If you have a dog and you bring it to the racecourse car park, either on racedays or the days in between, please remember to clear up any mess it and use the bins provided – because the poop fairy is no more.