While it’s too early to call the end of Summer, the days are definitely getting shorter, the temperature has dropped and the wind has increased a few knots – next week it will blow children across the Scottish Borders back to school for the beginning of the Autumn term.

Some of the children will be gutted that they’ll be missing the harvest and therefore an opportunity to drive supersized pieces of farm machinery, dwarfing the houses that they live in. Others will be more content, probably because they’ll have skipped school altogether.

The striping of fields by combine harvesters, and the swarming of grain trailers along local lanes, aren’t the only mechanical manifestations of Summer as it reaches its conclusion. Hedgecutters too, are meandering through the countryside, including around the track at Kelso. As regular as the geese that commence their migration across the high Borders sky at this time of year, Jock returns with his big green tractor and flailing side-arm to trim up the hedges around the racecourse. 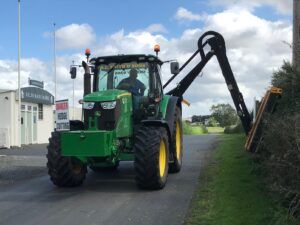 He’s been at it now for more than thirty years, turning up when the birds have flown their nests and the hedges have gone all tufty. And then he’s gone again, leaving behind him several miles of tidy green walls. I’ve never asked where he spends the Winter, probably the same place as the geese.

Meanwhile, Connor is trimming up the fences on the steeplechase course. Smaller than the perimeter hedges and built from birch stuffed into portable timber frames, the steeplechase fences are carefully shaped to ensure that they are attractive for the horses to jump. Each Spring we remove them from the track so that their frames can be repaired and the birch replenished. Tension mounts as the fences return to the track – a key sign that the new jumps season is almost here. Next will come several furlongs of white running rail, followed by the hurdles and course markers – until all is ready for the races.

Of course there are other places around the country where jump racing is already taking place (Saturday’s selection is Dear Sire in the Elderflower and Gooseberry Gin Handicap Hurdle at Perth Racecourse), but Kelso maintains a traditional programme, commencing in September and continuing through the Winter until the ground firms up again in May.

This week, after a hiatus of almost eighteen months, we launched the sale of admission tickets online. The first meeting is just over four weeks away and we can hardly wait to welcome spectators back to the races – like wildebeest at a watering hole, except with bookmakers. And hopefully no crocodiles, lions or hyenas…