We don’t usually like to use flood-based metaphors at the racecourse for fear of tempting fate, but it’s difficult to get away from the fact that Facebook was awash with comment this week after Gillian Meikle announced the retirement of husband Brian, from his post as Head Groundsman, following a bout of ill health.

Some called it a deluge of appreciation, others a tsunami of gratitude for a job well done. Either way, I’m glad that we invested heavily in drainage at Kelso this Summer – because the tears are going to take some mopping up.

Following many years propping up the bar in the Chicken Hutch on racedays, Brian Meikle crossed over the track in 2005 to become Head Groundsman. By his own admission, he had little idea of what the job entailed. But he fully justified the confidence placed in him, by the then Chairman David Thomson and Managing Director Richard Landale, becoming one of the most respected racecourse groundsmen in the country. 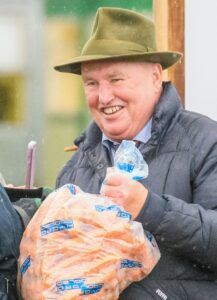 I am pleased to say that this is not a eulogy. Brian is very much alive and his health is a huge amount better than it was a few months ago – so there is no obligation for us to say nice things about Brian just because we think we should. Instead, people have been saying the nicest things because they really want to – because they are truly grateful for the friendship and service that he has offered so freely over many years.

A quick trawl of the Facebook response to Gillian’s announcement reveals comments about a “Kelso Racecourse Legend”, a “bloody brilliant groundsman” (posted by a Grand National winning jockey), and more heart-shaped emojis than could be deployed in a year by a classroom of teenage girls. I just hope Gillian isn’t jealous.

The plaudits are genuine and well deserved. During a tenure spanning more than two and a half decades, Brian commanded an award winning team who tended the track, kept pace with the latest developments in turf maintenance and oversaw many improvements. As the number of racedays increased, the requirements of the horsemen became more demanding too. But Brian could always be reached, at the end a phone, to give updates to trainers with entries (this week’s selection – Beeno – is entered to score a record equalling seventh win at Cartmel racecourse on Saturday) about the prevailing weather conditions and answer enquiries about the likely going.

Brian wouldn’t have a reputation for suffering fools and he can even be a bit scary when he wants to be. But when I first met him, sixteen years ago, I borrowed his lawn mower twice and returned it in two pieces both times. He couldn’t have been nicer or more patient – although nowadays when I need a piece of machinery I normally ask Connor, just to avoid witnessing that pained expression that would otherwise pass across Brian’s furrowed brow.

Like so many other people who have been associated with Kelso Racecourse, I will always be grateful for Brian’s professionalism and friendship. I shall look forward to seeing him on racedays – especially when he’s propping up the bar in the Chicken Hutch.