Amateur jockeys will have been stung by the BHA announcement, this week, that Hunterchases will only be permitted to take place for the foreseeable future if the runners are ridden by professional jockeys. The reason being that the current Covid rules allow only for the staging of non-contact, professional elite sport, in an outdoor setting.

On hearing the news, one of my Scottish Racing colleagues who will remain nameless (but might manage a racecourse north of Kelso where jump racing takes place in the Summer months), said “I hope the professionals are going to ride in hunter saddles and carry hunting crops.”

She may have been talking tongue in cheek, but I’d go a step further: for the full nostalgic experience, I think they should be obliged to change in the horsebox and wear a thick woolly jumper – just like the ones all amateurs and a fair percentage of professional jump jockeys would have worn up until the late 1980s. And if they’re really serious about recreating the amateur experience, they should feed them a plate of sandwiches, a slice of chocolate traybake and a large gin and tonic before they’re legged-up in the parade ring.

Not that amateur jockeys behave like that any longer. A large proportion of them ride regular work at a professional racing stable and some of them receive more rides than quite a few conditional riders. In fact, while there’s no telling what the situation will be by the time of the Cheltenham Festival in mid-March, it would be difficult to say that the riders of the runners in the St James Place Foxhunters’ Chase are participating in anything other than an elite event – one that is run over the same course as the Gold Cup and very occasionally in a faster time. 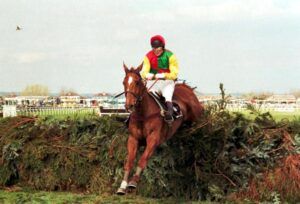 The definition of professional and amateur sport has a long and controversial history, with many professional sportsman suffering disapproval while their amateur counterparts were considered the true elite. While I am sure that the BHA would say that they had no choice in the matter, it’s difficult to understand the logic. Where is the additional Covid risk associated with amateur riders as opposed to professional ones? Especially when many of them will ride upsides each other on the trainers’ gallops most mornings.

While horseracing continues (when we can beat the wintry conditions – Sunday’s fixture at Kelso has been abandoned due to waterlogging, so this week’s selection is Vision Des Flos at Market Rasen on Saturday), the loss of point-to-points and the enforced changes to Hunterchases will have a severe impact on the grassroots of our sport. A school yard for some of our most talented horses, trainers and jockeys, the amateur dimension of horseracing will require significant support to recover during the months and years to come.