You know what it’s like. You’re party to a conversation regarding an individual who has committed some heinous act. Everybody knows the person, everyone is aware of what that person did and what they said, everyone has a view. Except you.

In my case, the conversation made reference to professional sportsmen and Dubai, so I assumed it had something to do with Flat racing – in which I wouldn’t have been totally disinterested although, to be honest, it’s not high on my agenda while we’re only half way through the much more engaging-in-every-way jump racing season. So eventually I had to ask: “Who is Neil Lennon anyway?”

The reaction featured a degree of incredulity. “What sort of bubble do you live in?” I was asked.

In any event, the conversation led me to reflect on the nature of bubbles. In one way or another, each of us lives in our own bubble. My bubble, as you’ll already have gathered, contains no football at all. I’m vaguely aware that football forms 80% of the Sports section in my newspaper, because those are the pages that I use for lighting the fire on winter evenings (I don’t save them for lining the budgie’s cage because, although it’s always noteworthy to see which celebrity photos receive the heaviest coating of birdshit, he’s no more interested in football than I am).

Football, by all accounts, has attracted a lot of negative attention for the players lack of adherence to Covid-rules during lockdown. I therefore consider myself to be pretty fortunate to be part of the horseracing bubble where, by and large, compliance has been strong to date – not out of a great love for the rules, but out of respect for one another and understanding that to behave otherwise would jeopardise our position of trust with both the public and the Government. 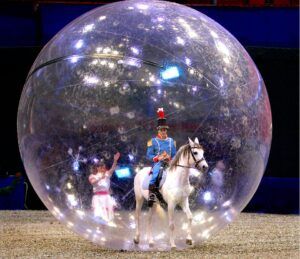 One of the pleasing things about bubbles (when viewed, by way of example, in a washing-up bowl) is the way their tiny, delicate and colourful outlines are supported by one another.

I value the inhabitants of my own small support bubble, I admire the colourful shine of my neighbours’ bubbles and I appreciate the fragility that many people feel about their own bubbles. But the thing about a collection of bubbles – whether on the surface of the washing-up bowl, in the foamy head of a pint of beer or within your local neighbourhood – is that they are very difficult to squash.

Of course there is a danger with bubbles too; if you only listen to those within your own, you can end up turning a deaf ear to conflicting opinions – so never forget that other tipsters (as well as other sports) are available. This week’s selection is Waiting Patiently in the Clarence House Chase at Ascot. When he wins, we can celebrate with a few bubbles.