We live in tense times and I’ve been warned that I must be careful about my language. No febrile talk of crushing the French or vanquishing the Europeans – no matter how much we want to see Enable record a fabulous third win in the Prix de l’Arc de Triomphe at Longchamp on Sunday.

Horses like Enable light up the decade. The race on Sunday promises to be one of the highlights of the entire flat racing season and a pretty good warm up for Kelso’s feature race of the day which, being jump racing, is obviously on higher plane of entertainment altogether.

Sunday will mark Simply Ned’s sixth appearance in the two-mile Belhaven Best Handicap Chase. Having won the race in 2014 and 2015, he was placed second behind The Flying Portrait and Forest Bihan in 2016 and 2017. He was fourth last year behind Nuts Well and all four horses take each other on again. Last seen beating Footpad in a Grade 1 Steeplechase at Leopardstown last Christmas, Simply Ned is a class act and is taken as our selection for the weekend.

The track at Kelso is in superb condition, which is a good job because it looks as though there could be quite a lot of rain coming. It’s the type of forecast that racecourse managers dread, because we know that the going will change and that the groundstaff will have to work hard to manage the track. It’s the sort of challenging weather that Perth Racecourse experienced throughout the Summer – resulting in special recognition of their team’s effort in this year’s RCA Groundstaff Awards.

Hazel Peplinski, Chief Executive at Perth, chose her words carefully when she said that her team’s reaction to a “very difficult year” had been “a monumental team effort of perseverance.”  What she actually meant was: “Humbug! We’ve had s**t loads of rain this Summer and the team have worked their b***s off. We’re all completely knackered but we’re quietly pleased that we got through it in one piece.”

The RCA Groundstaff Awards shine a light on a sector of the industry’s workforce which is integral to the sport and yet is frequently overlooked, remaining almost invisible to the race-going public until something goes wrong. Their efforts contribute significantly to the integrity of the sport, the welfare of the participants and the enjoyment of racegoers. 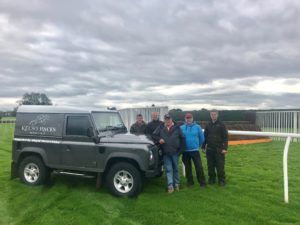 Here at Kelso we are immensely proud of our Head Groundsman Brian Meikle and his team who have been named as this year’s recipients of the Jumps Track Groundstaff Award. It’s a fantastic accolade and recognises the efforts that we go to at Kelso to present the best racing surface that we possibly can. Together with York (top flat track) and Lingfield Park (top dual-purpose track), the Kelso team will have to wait until mid-November to discover whether or not they will be named the overall winners of the 2019 Groundstaff Award.

Whatever the result, we like to think that they are the best team in Britain, probably all of Europe too.