There was racing at Worcester on Thursday and a coach-load of annual members from Kelso Racecourse in attendance. The last time so many Scots gathered on Pitchcroft they were part of King Charles II’s royalist army, there to fight the final battle of the English civil war.

That excursion didn’t end particularly well. Charles was forced to flee – hiding out in oak trees on his journey to exile in France. Around 8,000 Scottish prisoners, captured at the Battle of Worcester, were deported to New England, Bermuda and the West Indies where they were pressed into forced labour. So this weeks northern raiders to Worcester Racecourse were warned to behave…

Not that anyone need have worried, because horseracing enthusiasts everywhere are an amiable bunch. In fact one of the common factors, running like a thread through the fabric of Britain’s jumps tracks, is the ease with which conversations are struck between complete strangers. And Kelso’s annual members are a particularly sociable bunch, taking any opportunity to locate a bar in which to make new friends.

The tour started on Tuesday with a long journey south, pausing at Tebay services for world class scotch eggs. On Wednesday it was a short step to Ludlow where the warm welcome at the racecourse was augmented by a stop at the Ludlow Farm Shop, after the final race, where it turns out that they also sell remarkably excellent scotch eggs.

The farm shop is located just outside the gates of the racecourse, next to The Clive Arms where they serve real ales brewed by the Ludlow Brewery who happen to be race sponsors at the track. So the bus stopped there too. If you’re gaining the impression that these racing tours are as much about food and booze as about racing, you’re on the right track.

Before racing at Worcester on Thursday the bus stopped at the Kings Caple stables of Venetia Williams – just over the county border in Herefordshire – where there was tea and coffee, but no scotch eggs.

The horses at Kings Caple are supremely relaxed. Housed in a picturesque yard, set within rolling parkland, the horses benefit from being turned out every day. There’s an equine swimming pool for those that need it and a new circular gallop, consisting of deep sand on which the horses canter steadily – building their fitness and their stamina. The yard’s horses, which perform particularly well on soft winter ground, are notable for the longevity of their careers: they truly look like happy healthy horses. 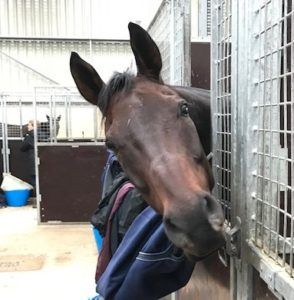 On Friday morning there was time for one last stop – at Dan Skelton’s thoroughly very modern training establishment near Alcester. More deep sand gallops, a solarium, water therapy treadmills – every gym facility you might wish for yourself, but designed for horses.

And there, looking out happily from his box at the back of a large barn, was Flashing Steel – this week’s selection for the Silver Trophy Handicap Hurdle at Chepstow. Asked whether he’d win on Saturday, the stable lass with him was non-committal, but the horse gave a snort. Which is another reason why we take these tours – to get information straight from the horse’s mouth.