It doesn’t matter what tone I use with my dog, nor how large the rotting chunk of roadkill that it holds in its mouth, there is absolutely nothing that I can do to prevent the dog from swallowing large pieces of long-deceased wildlife. The more urgent the protestation, the more rapidly the dog guzzles long straggly bits of fluff and gristle – which puts me in mind of the current debate about the size of the race programme.

It’s ironic that, at the same time the racing industry is arguing about a potential reduction in the number of races staged each year, The Jockey Club is consulting interested parties about the possibility of adding a fifth day to the four-day Cheltenham Festival. Like the dog, it seems, sometimes we just can’t help ourselves.

The two debates aren’t directly related, but they are both responses to the same question – how do we optimise the race programme to create the most entertainment and the greatest reward for the sport’s stakeholders? (And I don’t just mean by backing this week’s selection – Prince Dundee at Hexham on Saturday).

Economic factors have, in recent years, driven not just an expansion in the fixture list, but also an increase in the number of races staged at each fixture. As each race generates additional revenue, we’ve glossed over shrinking field sizes and a reduction in the competitiveness of our sport. Some even argue that this lack of sharpness, in jump racing, has contributed to Britain’s relatively poor performance in comparison to the Irish at Cheltenham. In Flat racing we’ve come to accept that whole swathes of the fixture list can go ahead with virtually no spectators – which definitely wasn’t the point when I started in the sport.

But if you believe that the annual race programme has become bloated, what do you think about adding a fifth day to the Cheltenham Festival? It may only require the inclusion of two additional races (if cards are restricted to six races per day), but even so – I can’t help but think of my dog gagging greedily on those grey green greasy bones. The gratification will be short-lived, resulting eventually in an indeterminate mess.

I’m glad that we’re having the debate. I believe that we can engineer better solutions than simply subtracting races from the programme / adding days to the Cheltenham Festival. Rather than dilute the quality of our biggest events, why not add trial events that create clear narratives that build towards the Festivals (including Aintree, Punchestown and not forgetting Perth!)

Take, for example, Kelso’s bet365 Morebattle Hurdle. As a weight-for-age race it attracted small fields. In its handicap guise, it is now a genuine stepping-stone on the road to the Festival – an intriguing and competitive event which yields a story that builds excitement ahead of Cheltenham. 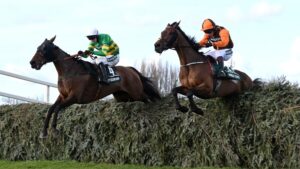 And there’s room for more. I’d like to see an Autumn card at Aintree that includes two trial races for the Grand National. Each field of thirty runners would consist of horses seeking a qualifying place in the World’s greatest steeplechase. The first eight from each qualifier, plus eight from the previous year’s Grand National, would be guaranteed a run – ensuring that the most appropriately equipped horses, not just the highest rated ones, would get to compete in the main event.

A new super-competitive raceday would be born – and a programme which is more palatable than a dogs’ dinner.