No celebration is complete without a feast, so I’m all in favour of the Fortnum & Mason sponsored competition to develop a special pudding recipe with which to celebrate the Queen’s Platinum Jubilee. 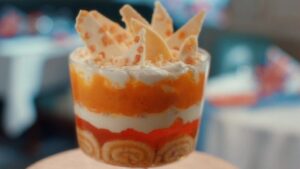 The winning recipe, concocted by Jemma Melvin from Southport, was a Lemon and Swiss Roll Amaretti Trifle – henceforth to be known as the Platinum Pudding. It is a citrus delight which is sure to cause a shortage of lemons throughout the country for the next three weeks.

Having started with more than 5,000 entries, I’m not sure how the judges managed to find a winner that contains so little alcohol (just a spoonful of Amaretto between 20 servings) – but that’s a minor quibble.

Not to be outdone, we’ve set about creating our own celebratory pudding for Kelso Racecourse’s Bicentenary. But rather than opting for a sweet sugary dessert, we’ve gone for a proper pudding – one based on a savoury batter that will be roasted in the oven like a Yorkshire Pudding, a homage to John Carr the Yorkshire based architect who designed the original grandstand which still graces the track 199 years on.

Step 1
Roast or fry the haggis, until it’s gained a bit of colour, and then add the diced red pepper. Cook for a further 3 minutes or so.

Step 2
Meanwhile, combine the eggs, milk, flour and salt in a mixing bowl and whisk until they form a smooth batter. Now add the sweetcorn to the batter; you can leave the sweetcorn out if you like – but it’s traditional to include at least one ingredient that no one really likes (think: currants in Coronation Chicken or tinned mandarins in the Platinum Pudding).

Step 3
Arrange chunks of haggis and red pepper in a deep roasting tray (containing really hot oil) and pour the batter mix over the top. Roast in a pre-heated oven, at 200 degrees, until the pudding rises and acquires a shade that’s somewhere between that of a dun pony and a chestnut.

Step 4
Serve with gravy, ideally made with Kelsae onions, and a wee dram. A 12-year old Glen Moray would go well with the caramelised haggis…

The Kelso Bicentenary Pudding, followed by a portion of the Platinum Pudding, would surely be a meal fit for the Queen – who happens to own this week’s selection (Steal A March in the 3.25 at Bangor on Dee).

And as with all the best recipes, it’s easily adaptable if you don’t have access to all of the ingredients. So, for example, if you’ve run out of eggs, simply omit steps 1-3, pour yourself a dram and Bob’s your uncle. Happy celebrations!