Apparently it’s a bad year for leatherjackets, the crane fly larvae which live in the soil and eat the roots of grasses. Severe plagues of crane fly, which lay their eggs on the turf, can result in large patches where the grass sward turns yellow and dies – pretty much the worst nightmare for any team of racecourse ground-staff.

Fortunately, at Kelso Racecourse, there aren’t too many leatherjackets because there is a huge population of crows (properly termed a ‘murder’ of crows) which eat them all. Unfortunately we do have a big problem with the crows.

Quite apart from terrorising all the other birds and spoiling the dawn chorus, crows peck at the divots that have been replaced after each racemeeting, picking up the small tufts of turf that we’ve carefully replaced and depositing them upside-down elsewhere. The result is an uneven racing surface which appears, to the uninitiated, to have never been repaired.

The safety of the racing surface is of paramount concern to all racecourses and so the crow damage inevitably creates a lot of extra work. Which is why it was so kind of Joanna, who works in the racecourse office, to cajole her family into making a scarecrow earlier in the year. It’s a team effort you see – where those who work inside at the racecourse help those who work outside, and vice-versa. 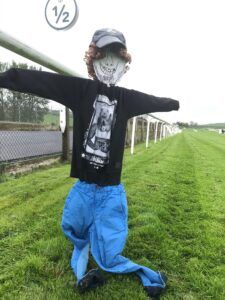 Joanna’s scarecrow is a truly frightening individual with a manic grin, curly hair and no face mask – I occasionally wonder whether he was based on anyone that I know.

The only problem is that, while the scarecrow does a pretty good job of terrifying dogs and small children, it doesn’t seem to have troubled the crows. Joanna might say that this is because I haven’t put it in the right place – but I’m not about to risk asking her where I should stick it, in case I get an answer that I wouldn’t like.

It’s important to stay on the right side of Joanna, not just because she’s a linchpin in the administrative process of admitting annual members to the races a week on Sunday, but also because she makes the very best savoury scones in the Borders. No better than that… I have literally never tasted a better scone, especially not one that has been fashioned using a horse-shaped cookie cutter. So the stakes are very high.

The crows are clever enough to recognise a pest-control vehicle whenever one arrives on site so, having enlisted the services of a specialist company, we’ve barely seen them for dust. The scarecrow will be deployed on racedays as a steward, to discourage members of the public from straying into the wrong place. And just to keep him busy, I’ve asked him to nominate this week’s selection: Restandbethankful in the 5.50pm at Stratford-upon-Avon on Saturday evening.