The buds on the newly planted beech saplings have broken into leaf, the grass on the track needs mowing yet again and evening jaunts are spoilt by clouds of flying bugs. Summer is finally here.

I swallowed a couple of flies while out for a run yesterday evening, and squashed a few more as they hit my eyeballs, but the one that temporarily brought me to a halt was the one that disappeared up my nostril. It may have flown out of my mouth, I’m not quite sure. But I’m trying to keep an accurate note because I’m participating in the great ‘bug splatter’ survey.

Car drivers and passengers have been asked to download the Splatometer App and count the number of bug splats on car registration plates following each journey. It’s part of a ‘citizen science’ project to help wildlife organisations monitor the state of insect populations.

The concept is simple: by cleaning our number plates and then counting the number of splats per mile of journey, we can gauge the relative size of the insect population. The survey is based on anecdotal evidence that people tend to find fewer insects squashed on their windscreens than they used to a couple of decades ago. That’s important because flying insects are essential to our ecosystem, not least for the pollination of crops and as food for other animals. 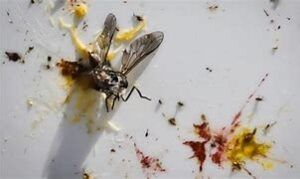 I do have some concerns about drawing too many conclusions from the Splatometer experiment. After all, if we measured congestion on racecourses by the number of spectators that were mown down by loose horses, we might conclude that crowds are much smaller now than during the 80s and 90s – when, in fact, it may just be that racecourses have become safer places, with more rails to separate horses from racegoers.

I’m pretty confident that modern cars are more streamlined and therefore more bug friendly than the upright old Fiat Panda-come-insect-slaughterer that I owned in the early 90s. And taking my own journey to work as an example, punctuated as it is by countless 20mph zones, it’s a struggle to get up enough speed to swat a fly. In fact it may be quicker to ride a horse.

For the past fifteen months we’ve had no need of a mechanism for counting racegoers, a quick glance at the grandstands was always enough to confirm that there were no spectators there. But this Sunday (when our selection is Constancio in the 3.07pm) we will be keeping a strict tally of the numbers coming through the gate and you’ll be relieved to know that we are not relying of the loose-horse-splatometer test.

Instead we’ll be asking Kelso’s Annual Members, who will be the only spectators permitted at the fixture this weekend, to scan their bar-coded membership cards at the entrance – which has the added benefit of telling us who they are. Whereas, once a fly is splattered across your windscreen, I don’t think there’s a way of telling what type of insect it used to be.