It’d be easy to define a racemeeting as an event where horses are ridden around a field to determine which one is the fastest, but that’d neglect the essential contribution gained through the addition of spectators.

Without spectators there is no ‘meeting’, all we’re left with is the ‘race’ – which is still a great service to provide when broadcasting live into people’s homes through Racing TV and ITV but, for all the atmosphere that races have without spectators, we might just as well call each event a ‘racezoom’. 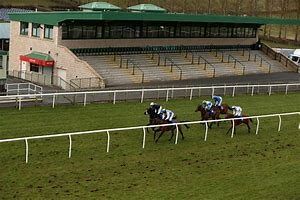 So, after an enforced absence of fourteen months, we’re finally preparing for the return of racegoers at Kelso on Sunday 30th May. It’ll be a cautious start – there aren’t actually any tickets available to buy. Instead we’ve been able to offer admission to all Kelso’s Annual Members without having to stage a ballot to determine which of them are or aren’t permitted to attend.

For the first time, in over a year, we’ll hear exclamations around the parade ring as racegoers make up their minds as to which horses to back. We can expect some of the chatter to be a bit muffled, because face coverings will still be required when placing bets with a bookmaker. But, despite having to adhere to a variety of guidelines, we’re looking forward to welcoming some people – actually here at the racecourse. Creating atmosphere, warmth and life.

A lucky few will be able to dine in the stands overlooking the track; capacity being reduced due to the distant spacing of tables. Others will spread out in the stands and along the rails to watch the races in the open air – one thing the racecourse is not short of is space.

We’re not expecting a Riot (which just happens to be the name of this week’s selection at Newmarket in the 3.50 on Saturday), but it wouldn’t be a surprise if we heard luck being cursed and jockeys being praised, or possibly the other way around, as the vibration of the race commentary is absorbed by people instead of echoing around the empty steps of the stands.

I have spoken to a large number of people in recent months who have been mildly (sometimes very) grumpy about missing racemeetings at Kelso. But, truth be told, we haven’t actually staged any meetings – only races. And while some of those races have been of an outstanding quality, with lots of fantastic horses, we have been missing our friends and can’t wait to see them coming back through the gate for the first proper racemeeting of the year.