I am a dunce, or so I was told numerous times at school. Only now, having visited the newly opened Great Tapestry of Scotland exhibition in Galashiels, I don’t feel quite so bad.

More than twice the length of the fabled tapestry that hangs at Bayeux, the Great Tapestry of Scotland was stitched by more than a thousand volunteers from across the country and completed in 2013. Having been unveiled at the Scottish Parliament, the tapestry has found a permanent home in the Scottish Borders after a very splendid (I love the ceiling) brand-spanking-new building was constructed to display it near the centre of Galashiels.

Of the 160 panels that illustrate key points from Scottish history, the twenty-fifth panel depicts John Duns – one of the most important philosophers of the Middle Ages, so named because he was born at Duns, just a few miles from Kelso Racecourse (albeit 755 years before the track was laid out).

John Duns developed a number of doctrines, including the ‘univocity of being’ (about the abstract concept of existence) and ‘haecceity’ (the individual property that makes each individual an individual). He wasn’t known as much of a racing tipster but, if he had been, he would probably have selected Minella Trump in the 2.20 at Perth on Sunday.

Even without wayward racing tips, his reputation ebbed and flowed over the next few hundred years as his beliefs drifted in and out of fashion. During the low points his followers became ‘dunces’ – a pejorative term for people who evidently believed the wrong thing. 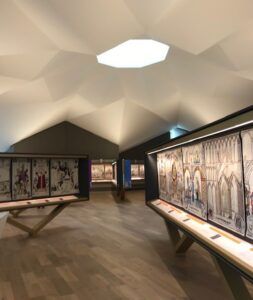 There are plenty more lessons to be found in the tapestry which starts with the most recent ice age in 8,500 BC, before skipping ahead to 320 BC when Pytheas the Greek became the first traveller to leave a record of his trip to Scotland – which he called Pretannike (or the land of the Pretannikoi) after all the people with tattoos.

All the usual suspects are there: Emperor Hadrian, Saint Cuthbert, Mary Queen of Scots, Alexander III (who died when falling from his horse on a late night excursion to see his beautiful new wife, Yolande de Dreux), Flora MacDonald (who helped the fleeing Bonnie Prince Charlie) and Agnes Sampson (who confessed to being a witch – but only after being hung by the neck for an hour).

Even tennis player Andy Murray made it on to one of the later panels, which prompted me to wonder about the sporting episodes which are missing – like the building of the grandstand at Kelso (Scotland’s oldest existing sporting building) in 1822, Freddie’s two gallant efforts to win the Grand National under top weight in the 1960s, Rubstic’s victory in 1979, One For Arthur in 2017, and the shock defeat of Zaynar at odds of 1-14 in the Morebattle Hurdle of 2010.

I can feel a new project coming on – is there anyone out there who knows how to do cross-stitch?