Given that so many exciting things already happen behind closed doors, why not horseracing too?

We experimented with the concept at Kelso on Monday and it went very well. Yes it was strange, yes there were a number of people who were sorry that they weren’t permitted to attend, but the races were broadcast throughout Britain and across the World to appreciative audiences for whom the ability to watch horseracing was a reassuring slice of normality. 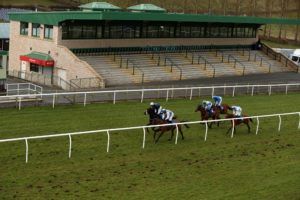 The revenue generated by the broadcasting of racing supports prize money (£1.4 million at Kelso last year) which is paid directly to racehorse owners and trainers who employ stable staff as well as the services of many small rural businesses. From farriers to feed merchants and hay-makers to paper bedding manufacturers, there are thousands of people who depend upon racing for a living. While racehorse owners recoup only a slim percentage of their outgoings through prize money, if there are no prizes, and no races, the horses will not stay in training and the rural economy will deteriorate. Livelihoods will disappear.

In the absence of any medical knowledge, it’s impossible to be anything other than supportive of the Government’s measures to combat the spread of the Covid-19 virus. Social distancing is an immediate priority and the complete cessation of horseracing was implemented in order to aid the national effort. However, once better testing for the virus is available and with appropriate hygiene measures, we have to hope that racing can resume behind closed doors where the absence of a crowd will reduce the risk of viral spread.

The sport deploys medical staff to safeguard the participants and this will require further thought and detailed planning. Like Kelso, most courses use private ambulances to scrape up fallen jockeys. While it is possible that private resources may be co-opted to assist in the national effort to tackle coronavirus in the coming weeks, the resourcing of medical services at racecourses could be reviewed under the new circumstances. For example, tracks currently hire a spare ambulance to be sure that, on the rare occasion that one has to leave the site, racing can continue in the full knowledge that the requisite number of ambulances is still available – but if racing took place without a crowd, it’d be simpler to delay racing until the ambulance returns.

Racing has continued behind closed doors in Ireland, including Northern Ireland, where the industry is appreciated as a key employer, a pump primer and source of liquidity. While it would be lovely to wait for the Government to step in and save us all on mainland Britain, there are no magic money trees growing in the Scottish Borders and there’s much that we could do to help ourselves.

2 Comments → What Goes On Behind Closed Doors?