Last night I broke cover in order to buy some milk. For the first time in forty days and forty nights, I noted that Sainsburys in Kelso had a stock of loo rolls. Two whole pallets full.

Like Noah’s dove, heralding the end of the flood, it didn’t seem too selfish to return home with a four-pack in my beak (or tucked under my wing) – especially having exposed the cardboard on the third-last roll in the house earlier that same day. Following a week in isolation, it felt like cause for celebration. Because even though it took quite a few more weeks for Noah’s Ark to settle on dry land, the olive leaf proffered by the returning dove was prescient of better things to come. 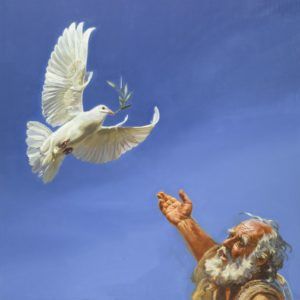 A younger and more optimistic relative of mine told me last weekend that she was drawing up a list of aspirational post-covid resolutions, the first of which was to attend more race-meetings. While I couldn’t have been more delighted, I was slightly shocked to discover that she hadn’t visited a racecourse since seeing Tom Jones at Cartmel in 2017. Everyone should attend a race-meeting more often than once every three years and maybe it would be a good idea if we all started drawing up our life-enhancing post-covid bucket lists now.

I’d like to demonstrate my support for the Italians post-covid by drinking lots of Chianti and eating plenty of Linguine ai Frutti di Mare – preferably in Venice in one of those nice open air markets (where they sell only fish and not live bats). And I’d like to show support for colleagues at other racecourses by visiting the handful of tracks that I haven’t raced at before, which include a small number of Flat tracks in Yorkshire plus Yarmouth and Fakenham. I’d like to support racehorse trainers too, by buying a couple of dozen horses to race over jumps in the North later this year – although I will need to win the National Lottery to do any of those things, such will be the call on money after the economy has crashed so comprehensively.

Following the flood, God blessed Noah and his sons and said unto them “Be fruitful and multiply and replenish the earth.” This sounds like excellent advice and will surely go straight to the top of many people’s resolution lists. For those couples that are too young to start families, but are self-isolating together, now it isn’t a bad time to get some practice.

Noah, who reached the grand old age of nine-hundred and fifty, subsequently planted a vineyard and grew grapes for making wine – only to be found lying naked in a drunken stupor by his children. It caused a bit of embarrassment and all sorts of difficulties for his descendants down the line (which includes all of us), merely underlining the importance of discretion, especially at a time when multiple generations are likely to be spending so much time in the house together. Of course it also tells us that you’re never too old to get drunk and remove all your clothes.

Have fun and stay healthy!