If Amhran Na Bhfiann wins at Epsom on Saturday the Aidan O’Brien trained colt will become the oldest Derby winner since Running Rein in 1844.

Except Running Rein wasn’t really Running Rein at all, the horse that won the World’s most prestigious race for three-year-olds was actually a four-year-old named Maccabeus who had been switched for the younger horse earlier in his life and passed on to an innocent new owner. Knowing that the four-year-old would hold a significant advantage over his younger rivals, the perpetrators of the fraud instigated a significant gamble on Running Rein who duly prevailed ahead of Orlando by three-quarters of a length. 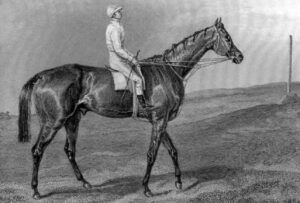 The plotters, who were due to pick up £50,000 in winning bets, were quickly rumbled and the owner of Orlando lodged an objection to the winner within an hour of the race being run. The matter was resolved by a civil case held at the Court of the Exchequer where the Judge demanded that Running Rein’s teeth should be inspected – because in the days before microchips, if you wanted to check the age of your gift-horse, you really would look in its mouth…

The real Running Rein couldn’t be produced and the 1844 Derby was therefore awarded to Orlando and his lucky owner Colonel Jonathan Peel. Maccabeus, the horse that had been standing in for Running Rein, was sold to a veterinary surgeon, Owen Henry Parry, who changed the horse’s name to Zanoni. He ran unsuccessfully, as a genuine five-year-old, in the Ascot Gold Vase and York County Cup before being exported to Russia as a stallion.

Amhran Na Bhfiann is not a four-year-old and so the Stewards needn’t stage an enquiry into his entry at Epsom. There will be no scandal on Saturday. The late scheduling of the Derby, as a result of the pandemic, means that all of the runners will go to start a month older than would have been the case in a normal year. Having been foaled on 14th January, Amhran Na Bhfiann just happens to be the oldest of the runners going to post.

The advantage held by older horses reduces as they mature. There is an official weight-for-age scale which is used for framing the conditions of races and the weights that each horse is obliged to carry. So at the beginning of June a four-year-old would be expected to give 15lbs in weight to a three-year-old if they were to race over a mile-and-a-half, while at the beginning of July the weight allowance is only 12lbs. By the end of the year the advantage held by the older horse is perceived to be just 4lb.

Only horses aged three-years-old are allowed to run in the Derby and the youngest horse in this year’s line-up, foaled on 13th May, is Worthily. In human terms, it’s a bit like an 18 year-old athlete taking on a 20 year-old – it can make a significant difference. As it happens, I’m going for neither. This year’s selection for the Derby is Pyledriver, foaled on 14th March – making him a Pisces as well as the equivalent of a very talented 19 year-old human athlete – trained by the very likeable Willie Muir.