Kelso Racecourse has been pivotal to the Borders community since 1822 when the foundation stone was laid for a new grandstand at Berrymoss. The racecourse has survived two World Wars, forty one different Prime Ministers (twelve of them serving at least two terms) and several deadly pandemics.

The grandstand was built out of sandstone because concrete had yet to be invented (Portland Cement didn’t receive a patent until two years after the stand was completed). The stone was sourced from a local quarry because the machinery didn’t exist to transport building materials over long distances (the first internal combustion engine didn’t appear until 1826).

The journalists who witnessed the opening of the stand dipped their pens in messy ink-pots because replaceable ink cartridges for fountain pens weren’t patented until 1827. And whatever the band played at the opening ceremony, it wasn’t an accordion because the instrument didn’t exist until 1829. Kelso Races was just about the only notable sporting event in the region, there being no rugby played in the Borders at that time: William Webb Ellis didn’t pick up that particular ball and run with it until 1823. 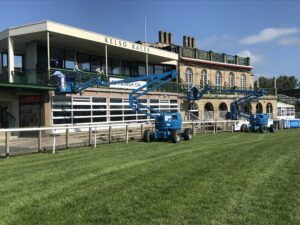 The construction of the stand would have been ferociously expensive, so it was a good job that it was completed three years before the first ever stock market crash in 1825 – caused by panic among investors in speculative South American bonds, including those sold by Scotsman Gregor MacGregor on behalf of an imaginary country called Poyais. (This week’s dodgy investment is Thunderous in the Fairway Stakes at Newmarket.)

More than half of the adventurers that set out for the fake faraway land failed to return. But whether the Poyaisians suffered from the first global influenza pandemic of the industrial age is not known. While the World had encountered various varieties of plague through the ages, it was trains that transported Russian Flu across Europe in 1889, killing over a million people. Nearly thirty years later many millions more died from the Spanish Flu which didn’t actually come from Spain at all.

Through thick times and thin, Kelso Racecourse has been measuring out the seasons – serving the community by providing entertainment, employment and a sociable space to meet. No profits leave the racecourse – all monies are reinvested, either as prize money for the benefit of the sport, or in improvements to the facilities.

During the latest pandemic we have been fortunate to be awarded a grant (by South of Scotland Enterprise) from the Pivotal Enterprise Resilience Fund, targeted at companies which have been adversely impacted by Covid-19 and which can demonstrate significant local supply chains. Despite losing an estimated £837,000 of revenue as a result of the pandemic, the grant has enabled the racecourse to offer work to several local companies including painters, carpenters and telecom engineers over the last few weeks. They, in turn, have been hiring machinery and purchasing materials from local providers.

As soon as the pubs open, the tradesmen and suppliers involved will be able to use the money in their pockets to stimulate parts of the economy that only beer can reach – thereby extending a helping hand to the hard-hit hospitality industry. As part of that same industry, we naturally hope that a small proportion of the funding will come full circle. As a pivotal enterprise in the Scottish Borders, we’re helping the community that we’re part of to help itself – and long may it last.