When Colin and Ruth McGrath bought the Queens Head Hotel in Kelso, in 2003, they sponsored a race at the May meeting to announce their new venture to the World.

Like many race sponsors, they presented mementoes to the winning owner (Guy Stevenson), the winning trainer (Mary Reveley) and the winning jockey (Paddy Aspell). But they didn’t want the winning horse to feel left out, so they also gave a sack of carrots to Minster Missile who’d done all the hard work by staying on in the final furlong to beat the Len Lungo trained L’Oiseau.

The following year Colin and Ruth sponsored another race to celebrate the fact that the hotel was still open and was actually starting to do quite well. But this time, says Colin, they received a number of complaints from horses that were entered in other races on the card, asking why they weren’t eligible to win any carrots. So they provided a sack of carrots for the winner of each race on the day.

Another year passed and yet more horses complained – why were there no carrots for horses that won races on other racedays? And so Colin gave a sack-full of carrots to every winner at Kelso that season. He’s been doing it ever since, despite the fact that he sold the Queens Head in 2007 – to Mark Hay, who happens to run the bar in the Pavilion Marquee at the racecourse.

Colin, who is a specialist advisor in employment law and acts as Chairman of all the Community Councils in the Scottish Borders, has now given away approximately 1,400 sacks of carrots. That’s around 14 tonnes, which is quite a large lorry full of carrots – or enough, if lined up from end to end, to stretch from Kelso Racecourse all the way to Coldstream. Although I’m not sure why you’d line carrots up in the road, or why you’d necessarily line them up in the direction of Coldstream as opposed to St Boswells or Jedburgh… It gets dark so quickly in the evenings at the moment, perhaps it would help racegoers to see their way home? 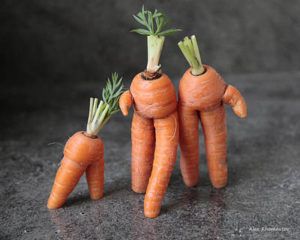 This weekend Colin is returning from Devon (where he visited Newton Abbot, but without taking any carrots) especially so that he can reward the horses at Kelso’s meeting on Sunday.

The runners are coming from far and wide in an attempt to claim the carrots – including Neverushacon who makes the journey from Jessica Harrington’s yard in Ireland, a first runner (we believe) for the stable at Kelso. If you’re here, you’ll see Colin in his distinctive striped jacket – probably handing a sack of carrots to Elf de Re, our selection for the first race on the card.

The ‘winning carrots’ (they’re outstanding in their field) have become just one of the unique features of a day at Kelso races – one of our five delights a day.

2 Comments → One of Your Five-a-Day