I looked into the beautiful dark eyes of the racehorse owners standing in the parade ring and I knew that I’d got it badly wrong. It wasn’t just their horse which was stunningly turned out, everyone was looking at them too – with their sleek shiny hair and cleverly coordinated accessories.

But their faces were oh-so-disappointed, reproachful and full of sorrow. How could I be such a bad racecourse manager?

We all know how important it is to give racehorse owners a great experience on the racecourse. They invest so much time and energy, not to mention money, into their dreams and yet the days when they actually get to bring their horse to the track are comparatively few and far between. And even then, all of them want to win – but there can only be one winner of each race, which means that a high percentage of owners are going to have their dreams dashed every raceday (or at least tarnished a little, ready to be buffed up for another day).

As it happens, these particular racehorse owners were not just blessed with natural good looks, they were also fortunate enough to have just had a winner. And their horse is not just any horse, he is Big River – who now has seven victories to his name, six of them coming at his favourite track which is Kelso. Big River is now all set to go to the Cheltenham Festival where he’ll have a great each-way chance in the Ultima Handicap Chase, a race in which he finished fourth last year.

The owners, whose partnership is known as the Two Black Labs, are Dom and Louis – the Labradors owned by Debs Thomson and Colin Dempster. Their racing silks feature the silhouette of a Black Labrador and paw prints on a white jacket. Following previous wins at Kelso, the Two Black Labs have become used to being presented with tins of delicious dog food and gravy bones. On this occasion, however, there were no special dog treats waiting for them in the Winners Enclosure. “What?” I could hear them thinking, “Didn’t you have any faith in our horse winning at Kelso once again?” 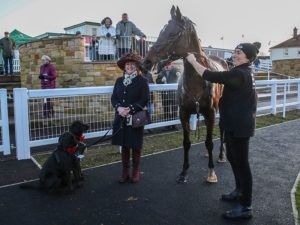 I’d thought about buying gravy bones the day before; I just hadn’t had time to get to the shops. And my own dogs have a guilty secret: they’ve become rather partial to Webbox Chub Rolls, which is just about the cheapest dog food you can find. Although I had some of the plastic-sleeved meat sausages in the boot of my car, it would have been like serving tinned spam to the Queen – more than a little embarrassing.

So we’re putting together a special doggy-bag which we’ll send to Dom and Louis. And we’re going to keep some Champers On Ice (the name of our selection in the Peter Marsh Chase at Haydock on Saturday) in anticipation of another good performance by Big River at Cheltenham in March.