It is, without doubt, the best event in the entire calendar – like Christmas and all my birthdays rolled into one, only with more guests. Nobody looks forward to the Cheltenham Festival each year more than me but, never mind extending the meeting to five days, isn’t it time we thought about staging it somewhere a bit further north?

Cheltenham is an awfully long way to expect people to travel and, given that the centre of the British Isles is somewhere just south of the Scottish border, perhaps it would be fairer to relocate the meeting a bit closer to Lucinda Russell, Ann Hamilton and Harriet Graham – trainers of horses like Corach Rambler, Ahoy Senor, Tommy’s Oscar and Aye Right.

Fortunately the BHA have had a similar idea and we’re working on a plan together now. The three-day Racing Post ‘Go North’ Festival features the finals of ten separate race series, nine of them with qualifiers which have been staged exclusively in the North. And just like Cheltenham, where races are staged on different courses throughout the meeting, we’ve got multiple tracks too – called Musselburgh, Kelso and Carlisle.

Getting under way at Musselburgh on Friday 25th March, the Go North Festival has several advantages over the Cheltenham version. It won’t be so crowded for one thing – no queueing to get in through the gate, fewer delays at the bar and easy access to the loos. 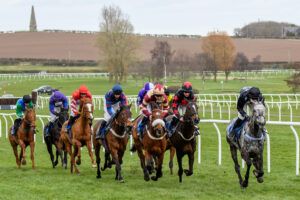 The scenery will be beautiful too. I mean, I love the Cotswolds, but nothing quite beats a drive through the Borders – one of the most unspoilt landscapes in Britain. Unlike the Cotswolds, it really is possible to drive, it’s not all bumper-to-bumper for the last ten miles, with impatient passengers desperate for the toilet having drunk too much tea or Champagne at breakfast.

Drinks are cheaper in the North too. While Cheltenham racegoers have apparently complained this week about paying £7 for a pint of Guinness, £8 for a glass of wine and £14 for a gin & tonic, the standard price of a pint of beer in Kelso’s main bar is £4.80, a glass of wine is £5, and a gin & tonic £5.30. Not that I’ve actually bought a drink at Cheltenham this week. I did enjoy a very good pizza, reasonably priced at £10, as I sat next to the parade ring selecting my next winner.

Writing of winners, this week’s selection is Kajaki, trained by Nicky Richards, who runs in the Cab On Target Series Qualifier at Newcastle on Saturday. The final will be staged at Kelso on 26th March, the second day of the Go North Festival.

The meeting concludes at Carlisle on Sunday 27th March. Three-day tickets are available, in advance, online for the bargain price of just £40. You can expect all the top northern trainers to be represented and each of the series finals look sure to be highly competitive betting events.

While we won’t be transferring the Champion Hurdle or the Gold Cup to the programme just yet, it’s surely only a matter of time before the idea catches on…