There’s a multitude of reasons why horses develop large public followings – the flashy brilliance of Desert Orchid, the perennial pre-eminence of Red Rum in the World’s most famous race, the sweet name and high-quality hurdling of Honeysuckle.

With eight Kelso victories to his name, it’s little wonder that Big River has such a large fan-base within the Scottish Borders, but his fame has spread much further than that. Analysis of Facebook activity revealed that more people downloaded the video of Big River winning the Borders National at Kelso than all the races at Cheltenham in December. At 264,000 views, the Lucinda Russell trained twelve-year-old received more views than all the races that took place at Kempton and Sandown put together.

A significant proportion of the views originated from India, where a large part of the population has a strong affiliation to a big river of their own. The Ganges is said to flow across the heavens, in the form of the Milky Way, before reaching earth on India’s northern plains, there for the salvation of souls – an embodiment of the Goddess Ganga in liquid form, opening a channel of communication between heaven and earth. 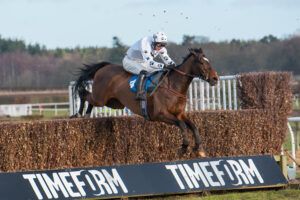 And if the Facebook viewers of India imagined that Kelso’s Big River was some sort of messenger from the Gods, who could blame them – blazing up the Kelso straight, like one of the horses of Helios dragging the Sun across the sky.

Big River might not be the best horse that ever set hoof to the Kelso turf, but he’s one of the most handsome, one of the most popular and one of the joint record-holders for winning the most races. If he could talk (and I’ve heard no evidence that he can’t), I’m certain that he’d have something enlightening to tell us as he bids to make the record his own at Kelso this weekend.

There’ll be a whiff of nostalgia in the air at the racecourse on Saturday – nothing to do with the muck spreading which is going on down the road at Eccles, but an intangible enchantment inspired by the naming of the Jodami Go North NHF Race, in which this weekend’s selection is Ontherouge.

Trained by Peter Beaumont, Jodami made a winning debut here on 21st March 1990. Ridden by a certain Mrs A Farrell, a trailblazer for female jockeys who later became Kelso’s Clerk of the Course, The Racing Post’s analysis read “Headway and prominent halfway, led 5f out, ran on well.”

Jodami made four appearances at Kelso, all of them winning ones, but is best known as the winner of the Cheltenham Gold Cup in 1993 and the Hennessy Cognac Gold Cup at Leopardstown in 1995. He will be fondly remembered by many Kelso regulars as one of the very best they’ve seen – and like certain other horses, a messenger that’s capable of bridging the gap between heaven and earth, like a gleaming path, a sacred river, a Big River…