The weary hand of old-ness is creeping upon my shoulder. I know this because it’s been pointed out to me that when concentrating on an important task, like carrying a coffee cup across the office, I have started to poke my tongue out of the side of my mouth.

Of course young people think this is terribly funny. By ‘young’ I mean anyone who can’t compare the relative merits of Wayward Lad to Desert Orchid, Kauto Star and Best Mate; the same people that blame me, my parents and my grandparents for destroying the planet through global warming – sanctimonious little gits…

When I were a kid, we were brought up to respect our elders. Nowadays old people are there only to be mocked and abused for their Brexit opinions. Which is why I thought it was particularly important that Kelso Racecourse should host a meeting for Dementia Friends – an opportunity for staff and visitors to learn more about an illness that will eventually affect one third of all people aged over 65. 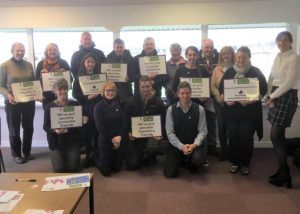 Not that Dementia respects the boundaries between young and old – it can affect any person at any age. It’s also true that many old people strike out with twice my mileage and a completely full jar of marbles. Dementia isn’t a natural part of ageing, not everyone will experience its effect, it is caused by any one of a hundred or so different types of brain disease.

Dementia Friends Scotland is currently working with all five of the Scottish racecourses and with staff working for the William Hill betting shop chain, to increase awareness of the illness and to explain that it is possible to live well with Dementia – that there is much more to a person living with the illness than the illness itself.

Dementia affects different people in different ways, but one of the most common symptoms is short-term memory loss, which can lead to confusion and sometimes to frustration. Taking the time to understand these issues can make an enormous difference to the happiness and wellbeing of someone living the illness, because we start to see the whole person.

While short term memory loss can be distressing, the recollection of more distant events can be a reassuring and pleasurable experience. Reviewing old photographs and memorabilia, whether from family occasions or sporting events, can therefore be a very positive activity. Which is why it really is useful to be able to discuss the relative merits of racing’s greatest steeplechasers and hurdlers.

Who knows, in future years, I might not be able to remember which horses won races during the preceding week – but the memories of Buveur D’Air will be crystal clear. And how he got trounced on the run-in by his stable-mate, Brain Power (this week’s selection), while attempting a hat-trick of Champion Hurdles next Tuesday at Cheltenham.