While almost ten million people tuned in to enjoy the return of The Great British Bake Off on Channel 4 last month, here at Kelso the competition never went away.

From Gill’s shortbread, to Trish’s cakes and Joanna’s scones, the competition has been fierce all year long. And no matter how accomplished the current crop of bakers are, it seems that no one will ever surpass the reputation established by Betty Tweedie, who baked cakes for the raceday stewards, racecourse directors and their guests fifty years ago.

Betty is commemorated with a race title at Kelso each season, together with husband Reg who was Chairman of the racecourse but is best remembered for training Freddie – one of the most talented steeplechasers ever to have been trained in Scotland and certainly the most popular. Huge crowds turned out to see Freddie parade in Kelso after his second-place finishes, under top weight, in the Grand Nationals of 1965 and 1966. Celebrity culture has changed a great deal since then, but the Tweedie family fortune would probably have been considerably greater now if Betty had released a cook-book at the time. 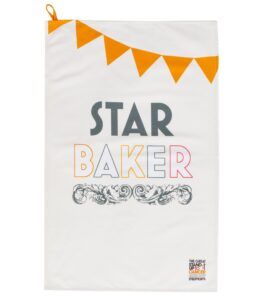 Instead, our current crop of bakers place their trust in Nigella or Nadiya Hussain. The latest cake-tin to turn up at the racecourse came courtesy of Robert Hogarth, Kelso’s raceday announcer who regularly rides out at Lucinda Russell’s yard and also works behind the scenes with the ITV Racing Team. Robert, who boasts that his cakes last less than five minutes in the tack-room at Arlary Stables, produced an expertly light sponge cake and some pretty good chocolate brownies at the last meeting. While impressing with his technical skill, he lost points when we noted that he’d given the office team all the ones with slightly burnt edges while reserving the chewier ones for his favourite people in the parade ring.

Early news about this year’s Bake Off revolved around Freya who, as everyone knows, is attempting to win the competition without using any animal products whatsoever. In a blatant attempt to capitalise on the story, the BHA have just announced that from the start of the year all Thoroughbred racehorses will be banned from the food chain – which is a good thing because I can’t understand why anyone except the French and a few other barbarians would ever want to eat a horse in any case, never mind include them within a cake recipe.

Horses, as Freya has pointed out to her fans, are for riding. She’s apparently taken some criticism from hardline vegans for saying that too, which is harsh because it makes admirable sense. If we didn’t choose to ride horses, to compete with them and enjoy them, there’d be no point in breeding them – we’d have no horses in the World and it’d be a much poorer place without them.

While this week’s star-tip is awarded to Proschema, who runs in Saturday’s Silver Trophy Handicap Hurdle at Chepstow, the racecourse office remains open to entries for Kelso’s star baker competition. Cakes should ideally be chocolate or lemon drizzle please.