Face painting wasn’t really a thing when I was a child. There were plenty of occasions when our faces ended up being covered in paint, but that was merely a by-product of ordinary painting – the sort where the picture was supposed to take shape on a sheet of paper.

That doesn’t mean that race-meetings were devoid of children’s entertainment. One of my earliest racing memories is of my father lifting me on to a miniature train, somewhere within a funfair, shortly before the runners came under starters orders at a point-to-point. I was wild with indignation. Why on earth, I wondered, would he think that I’d forgo watching the race in order to sit on a heaving train together with a load of other screaming kids?

I’m pretty sure that I shouted about wanting to get off. I might even have cried, because that’s what toddlers do: you take them somewhere nice, you give them a treat and then watch as they turn purple with inexplicable rage.

At Kelso, we do our best to learn from the mistakes our parents made. Which is why, when we host our Family Raceday on Sunday 3rd October, the children’s amusements (including a large inflatable slide, bouncy castle and merry-go-round) will be located in an area where both parents and children will be able to see the racing if they want to. Children won’t be required to pay for the entertainment, nor will parents be required to pay an entry fee for their children (racegoers aged 17 and under will be admitted free of charge as long as they are accompanied by a responsible adult).

For those with the energy to prepare in advance, there’ll be a fancy-dress competition. Children should dress as their favourite character from any book (from Black Beauty to Harry Potter) for their chance to win some exciting, but not too sugary, prizes. 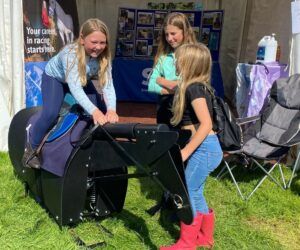 The team from the Scottish Racing Academy will be on hand too, with their life-size model of a racehorse and the Equicizer (whose name is Betty), so that children will be able to learn what it’s like to care for a horse and how to bandage legs, while also gaining tips on riding like Ryan Mania – who partners this week’s selection, Flamboyant Joyaux at Market Rasen on Saturday.

Inevitably, we have booked a face painter too, although it wasn’t an easy task to find one. It turns out that they’re in as short supply, right now, as lorry drivers. I briefly flirted with the idea of hiring a tattooist instead, but decided that it wouldn’t be fair on Joanna – who’d be the one fielding the phone calls if the parents objected to the permanence of the designs…

It’s going to be tricky to locate the face painter in a place where everyone (mini Spidermen, wolves, cats and butterflies included) will be able to see the racing action. But we’ll try to place a TV screen nearby, and a coffee stall too – because, when it comes to entertaining families, we like to think that we know what’s important.