The majority of the population enjoys the benefits of a phenomena known as ‘optimism bias’.

Or, if you’re a born pessimist, you might say that we ‘suffer’ from optimism bias – but then you’d be part of a steadily shrinking minority because scientific studies have demonstrated that pessimists tend to be less successful in life, less happy and more vulnerable to ill-health.

Optimism bias explains why the majority of people believe they will live longer and be more successful than average. We can’t all be right, which means that some of us are going to be disappointed.

But the comforting thing about optimism bias is that it allows us to revise our expectations after each defeat. So readers of this blog, for example, will be familiar with the feeling of losing money on a hopeless tip. But despite that weekly disappointment, many still allow themselves a small punt on the possibility that the next selection might be a winner. Remarkable!

Optimism protects us, allowing us to be let down gently as we descend through the gears of the current coronavirus pandemic: at first we believed that the virus would be isolated in Wuhan, then we thought it was unlikely to spread from China. Once the disease had arrived in Britain it was inconceivable that it would lead to the complete close-down of our country and yet, here we are…

I, for one, am looking forward to getting back to normal – although several close friends and colleagues have remarked upon the hopelessly deluded state of optimism that allows such a thought to even enter my head. So I’ve had a quick look at the flip side and I can see their point: the World is going to pot, our economy has gone down the pan and hangs by a Government-spun thread of virtual finance which will, as sure as eggs is eggs, crash civilisation when it eventually stretches and snaps – resulting in war, famine, pestilence and death.

And while that may sound a bit depressing, I do perceive a small ray of sunshine amongst the debris: for even as the four horsemen of the apocalypse gallop across the horizon, I can hear bookmakers welcoming the opportunity of something to bet on at last. 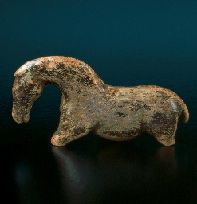 One of the oldest man-made objects ever found is a small sculpture of a horse, carved out of ivory and deposited in the back of the Vogelherd cave in Germany. Pre-dating Christianity by a mere twenty-eight thousand years, the carving is the result of skilled hands, a lot of spare time and the inspiring beauty of a horse. It is an indicator of just how enduring the link is between humanity and equestrianism.

Everybody needs an isolation hobby, so I’m going to start carving my own sculpture of a horse this Easter weekend. Who knows, maybe someone will find it in thirty-thousand years and understand how our love of horses helped us through a difficult time. Now there’s something to feel optimistic about.

4 Comments → A Ray of Sunshine