The First Minister has spoken and, as the late singer Meat Loaf might have said, “Anything is Permitted.”

Except of course that’s not exactly true – shoplifting is still heavily frowned upon, as is armed robbery, drug dealing, and driving at more than 20 miles-per-hour through any of the towns or villages of the Scottish Borders. But at least spectators will now be allowed to return to racecourses in Scotland, after nearly a month of being “All Revved Up with No Place to Go.”

Anyone who has so far managed to survive the symptoms of Covid, the lonely isolation of lengthy lockdowns, and the cancellation of planned medical procedures is now entitled to say, “Heaven Can Wait.” Or even “For Crying Out Loud” (you know I just want to go to the races).

Of course there will still be a few rules about wearing face coverings in certain situations, and possibly providing evidence of vaccination or a negative test result at the busiest fixtures. But it’ll no longer be a case of “Read ‘Em and Weep.” Bookings can now be made online for tickets to all of Kelso’s fixtures between now and the end of May – including Ladies Day, which they say is often attended by “Lost Boys and Golden Girls.” 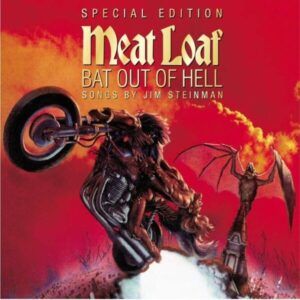 Meat Loaf, who was born Marvin Lee Aday in September 1947, sold more than 65 million albums from his “Bat Out Of Hell” trilogy – which could have been named after watching one of the major cavalry charges like the Ayr Gold Cup (but probably wasn’t). His apparent affection for Flat racing was exposed with his ode to a Coolmore owned Guineas and Oaks heroine, “I’d Do Anything For Love,” while he revealed his most fervent hope of finding a similarly super filly in the lyrics of “Dead Ringer for Love.”

Regular readers will be wondering when I’m going to get to the point by naming this week’s selection. Well, “You Took the Words Right Out of My Mouth” because no one likes to be “Left in the Dark” and, so far, this week’s blog appears to be going “Nowhere Fast”. If you are looking for “A Piece of the Action”,  I’d recommend that you look no further than Empire Steel in the Peter Marsh Handicap Chase at Haydock on Saturday.

The Borders trained gelding will be the third tip given in this space so far this year after Navajo Pass, who finished seventh at Sandown, and Soft Risk who won at Kelso last Sunday. As Meat Loaf might have said, “Two out of three ain’t bad…”