As postal addresses go, ‘Himself, Ireland’ is pretty brief – but well-wishing cards that bore just these two words still managed to reach Arkle in the 1960s. Such was the fame of the World’s best ever steeplechaser, one letter even reached him after it had been misdirected to ‘Arkle, Westminster Abbey’ – presumably because the sender estimated that this was the most likely home of his owner Anne, Duchess of Westminster.

Historically, few individuals have enjoyed the privilege of being addressed with such brevity. Even my letters addressed ‘Santa, North Pole’ seem to have gone astray in recent years. Either that or I haven’t been as good as I thought…

A letter addressed to ‘Boris, No 10’ would probably reach it’s mark via the Royal Mail, but it’s now become possible for everyone to have a three word address thanks to a new App called What3Words. 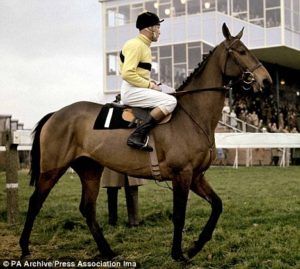 The App’s designers divided the surface of the planet into 57 trillion small squares, each measuring 3m by 3m – which means, for example, that every single domestic gazebo erected in Kelso’s trackside parking area can have its own address. They then randomly assigned three words (using a relatively modest vocabulary of 40,000 words) to each individual square – giving each tiny space a unique label.

The result is that you’ll no longer need to text your friends to tell them that you’ve set up a picnic about 40 yards from the final fence, roughly opposite the small tree with the pale coloured bark, in-between a blue BMW and a red Renault. Instead you’ll be able to offer a concise location reference: ‘pies.thickens.storybook.’ or ‘negotiators.holding.crab.’ Both of which sound as though they might be quite good picnics.

The entrance to No 10 Downing Street, by the way, is defined as: ‘slurs.this.shark.’

Searching for three-word location references on your telephone becomes quite addictive. While the words were generated randomly, that doesn’t stop them having interesting associations. Is it a coincidence that the place where racehorse trainers stand to watch their horses before a race at Kelso is labelled ‘cleanest.skunks.soap.’?

And I’m curious… I’d like to identify the people sitting at the table, in the Tweedie Grandstand, which is located at ‘secretly.commands.bloomers’. And I think I already know who’s booked ‘regarding.foggy.crunches.’

The system is intended to have a wide variety of applications. It’s already helped to locate several lost hikers in a deep dark forest and is being used by the postal service in Mongolia to deliver parcels. I’m sure we’ll be able to find a good purpose for it on racecourses.

In the meantime, I don’t expect Brian Hughes to have any difficulty finding his way to the Winners Enclosure at Perth on Saturday. He’s jocked up to ride our selection Nayati in the Stone of Destiny Handicap Hurdle race. But just in case he’s not sure, the winners spot is at ‘bars.carpentry.nightfall.’