Whose idea was it to write a blog on the day before the most valuable raceday ever staged at Kelso? There’s much to do – owners’ tickets to arrange, lunches to coordinate, rainfall to measure and the latest Going descriptions to communicate.

The phones are ringing off their hooks with people trying to book tickets (which is marvellous) and I think that the ITV rigging team might be building a new racecourse (which is even more marvellous); I just hope they finish before tomorrow and that they leave some of it standing when they leave on Sunday.

Scaffold towers have sprouted all over the place and cables are being trained from one end of the track to the other. The atmosphere is electric; hopefully not because of all those cables (note: must check cabling when blog is finished), but because everyone is so excited about the races tomorrow. 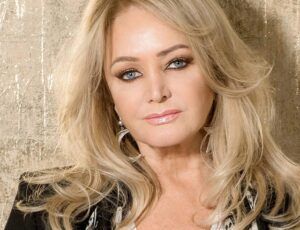 Bonnie Tyler – looking out for a Kelso hero

A stellar array of equine talent will line up for the edification of racegoers (and ITV viewers) in seven races including the £100,000 bet365 Morebattle Hurdle. The weights for the feature race are headed by Buveur d’Air – a dual Champion Hurdler trained by Nicky Henderson who has already achieved hero status in many people’s eyes. But will he become a Kelso hero?

To mark the Bicentenary of the racecourse, we’ve decided to identify two-hundred heroes to represent the two-hundred years of racing on the Berrymoss. And we need your suggestions – not because we haven’t got any ideas of our own, but because we don’t want to leave out any of your favourites. Nominations can be heroes or anti-heroes – horses that have won the Morebattle Hurdle four times (like Jinxy Jack) or that got defeated at odds of 1-14 (Zaynar). They might be Morebattle winners that followed up at the Cheltenham Festival (like Large Action and The Shunter) or ones that famously failed to do so (like Browne’s Gazette).

Some of the heroes might be human, but they’ll have to be pretty special because, on the whole, horses tend to be better than humans. Take for example their vices: a horse is considered to have a vice if it weaves from side to side, or burps while holding onto the stable door – they’re not generally into smoking, drinking, gambling too much or sleeping around (although that didn’t stop Jeffrey Bernard becoming one of my heroes – I wonder whether he ever had a connection with Kelso?).

Anyway, take your time – don’t try to call us with your suggestions before 5pm tomorrow. The phone lines are busy. But please do watch ITV’s coverage of racing from Kelso or, even better, come and see the horses in the flesh. Perhaps you’ll identify a new hero to tell us about; maybe it will be Nells Son (this week’s selection) in the bet365 Premier Novices Hurdle.