It’s easy to forget, when you have four taps and a water closet in every bathroom (and frequently more than one bathroom plus a kitchen in every house), just how important it used to be to have a well.

The life-giving properties of a stable water-source enabled communities to develop and grow, giving rise to place names like Camberwell, Southwell and Fontwell. The racecourse at Fontwell was named by Alfred Day who fused two words together that meant the same thing; ‘font’ being the Roman word for a well. The well (that Alfred developed his racecourse next to) is located beside the junction of an ancient Roman road, better known now as the A27.

We don’t see so many wells nowadays. Presumably they were all covered up because it was too easy for people to fall down them, or too tempting to throw naughty children inside one. But their cultural significance persists: instead of children, we tend to favour chucking money into them at the same time as making a wish. It’s a tradition that probably has a thousand different origins, although my favourite is the story about the Norse god Odin.

Odin, who was engaged in a relentless search for knowledge, asked to drink from the waters of wisdom that dwelt within Mimir’s Well. Mimir, who sounds a bit creepy, asked for something of value in exchange – like Odin’s right eye. And so Odin exchanged one half of his conventional sight for the ability to see into the future and understand why things must be.

On Saturday we’ll be doing something very similar at Kelso Racecourse – where we discovered an ancient well last year, hidden beneath the tarmac of the grandstand enclosure. We won’t be plucking anyone’s eyes out but it’s conceivable that, by throwing a few coins into the well, racegoers could be blessed with the kind of foresight that will help them to back winners. 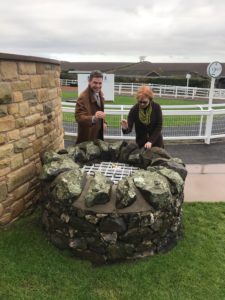 Of course there are other ways of making a wish: it’s just about time to start making Christmas cake and everyone is allowed to make a wish while stirring the mix for the first time. This week could also offer the best opportunity to see the Northern Taurids – a shower of meteorites originating from the constellation of Taurus creating an annual display of shooting stars.

Personally, I like to make a wish every time I travel down a road that I’ve never been on before – as some people will on Saturday due to the minor diversion which is in place south of Kelso Racecourse near the high school.

I’ll certainly be putting a coin into the well at Kelso, if only because all the money collected from the water this season will be donated to the Injured Jockeys Fund. No need, of course, to wish for a winner – because I already know that this week’s selection for the £30,000 IJF Wishing Well Steeplechase is the Chris Grant trained Acdc.

If you come racing and throw some small change into the well too, then I wish you all the best.