Well, well, well… What have we here?

In the process of stripping away tarmac surfaces, in order to make space for the new parade ring at Kelso Racecourse, we’ve discovered an old water well. At least five metres deep and filling readily with water, the well is constructed from small boulders and situated behind the listed Grandstand, built in 1822.

Of course it’s not supposed to be there. It’s location, in the context of our new scheme, is right in the centre of one of the curved sections of viewing steps at the end of the parade ring.

But it’s too beautiful a feature to cover up. Like an irregularity in a hand-woven oriental carpet, we’ve decided that the well should be celebrated as one of those defining characteristics that makes the design special. 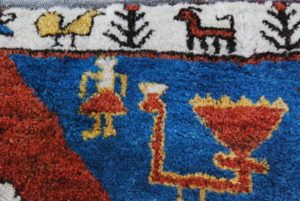 The new Parade Ring at Kelso

In many Muslim weaving communities, deliberate imperfections are incorporated into the design of carpets to illustrate the point that only Allah is free of all blemishes – man and all things made by man are, by definition, flawed.

The most common imperfection in carpets is known as ‘abrash’, a word that originates from the Turkish description of something that is speckled or piebald – like a black and white pony. Abrash is the natural variation in colour across the length of a carpet, resulting from the use of small batches of naturally dyed yarn. Not only does the nomadic passage of the weavers result in variations to the concentration of dyes used, but the colours change gradually over time, to differing degrees across the carpet, according to their exposure to the elements.

So this week we’re celebrating the eccentricities that make us quirky and characterful, like the people around us whose imperfections we find charming and the diversity of horses that frustrate us by winning when we haven’t backed them – and losing when we have. All of them flawed, all of them fabulous, just like the adapted design of Kelso’s new viewing terrace which will ensure that the water well becomes a unique feature of the parade ring. We’ve decided to omit the curved step which would have covered the well and instead we’ll build up the circular structure for everyone to see.

Who knows, perhaps racegoers will discover that their fortune improves when they toss a penny into the well. Mad as it sounds, the concept is not so different from the idea of following the selections contained within this blog – which has been likened to folding up fivers and posting them through the grill of a drain cover.

I’ve failed to find a piebald coloured horse to tip this weekend, so my selection for the Sky Bet Dash at York on Saturday is Tommy Taylor. He’s not abrash, he’s a bay gelding, so expect the advice to be flawed in a more obvious sense. Enjoy the race, but maybe limit your stake to the sort of monetary value that you wouldn’t mind throwing into a deep, dark, watery hole in the ground.