When it comes to weighing things, accuracy is a relative concept. So three-quarters of an ounce makes quite a big difference if you’re buying a bag of Liquorice Allsorts, not so much if you’re weighing a horse.

In 1901 the physician Duncan MacDougall attempted to weigh people as they died. He chose patients who were physically exhausted so that they didn’t move around too much on the scales. One of the patients lost weight at the point of death but then put it back on again. Two lost weight as they died and then lost a little bit more afterwards. A fourth patient lost 21 grams exactly, leading to the popular speculation that the human soul weighs 21 grams or three-quarters of an ounce (more or less four Liquorice Allsorts).

MacDougall also experimented by weighing fifteen dogs as they died and didn’t detect any changes in their weight at all, leading him to the assumption that dogs don’t have souls. While I have some difficulty believing his conclusion, he loses further credibility for poisoning the dogs – which just isn’t a nice way to carry on and possibly makes him an untrustworthy source for verifying the presence of the human soul.

We don’t actually need to weigh the souls of the jockeys riding at Kelso Racecourse, but we do need to weigh their bodies, saddle and kit (excluding riding helmet), in order to ensure that each horse is carrying the correct weight in the races. For example, Aye Right (this week’s selection) is set to carry 11st 1lb in the 2 mile Handicap Steeplechase on Sunday, which is 11lb less than Simply Ned who carries top-weight. The relative difference in weight can make all the difference in the closing stages of a race – so we wouldn’t be thanked for having inaccurate scales. 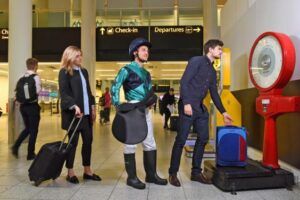 The responsibility for weighing the jockeys belongs to the Clerk of Scales, who uses the racecourse’s obscenely expensive (and recently calibrated) electronic scales. We also provide trial scales in the jockeys’ changing room to help them get ready, so when we created additional temporary changing facilities (to facilitate social distancing for the riders) we had to find an extra set.

Fortunately, when purchasing the electronic scales a few years ago, we retained the old mechanical ones (large, red, old fashioned and made by Avery) for just such an eventuality. Having hauled them out to the marquee before the first racemeeting of the season, the jockeys encountered a small problem. The bendy floor of the temporary changing area moved as the jockeys got on and off the scales. Depending on where they stood on the platform they could weigh a couple of pounds lighter or a couple heavier, which was no good at all.

So this week we’ve removed part of the marquee floor, built a small platform from concrete slabs and re-sited the scales. They’re now good to go and I’m sure we’ll be able to tell if the jockeys eat extra Liquorice Allsorts, even if we can’t adjudicate on the state of their souls.