Good things come to those who wait. Which is why you’ll find the customary selection, a 33/1 dead-cert, at the very end of this week’s blog.

Patience should also be rewarded for all the people who were frustrated following the postponement of last weekend’s major events. And that’s not just Kelso’s Totepool Premier Hurdle Day, which has been rescheduled from last Saturday to Sunday 11th March… There was much rejoicing when it was announced that BOG Potato Day had also been saved, although that too has been scheduled for Sunday afternoon, on the other side of the town.

An unfortunate clash has therefore been created for a specific segment of our market: the racing gardeners. Or the gardening racers. Whichever you’d like to call them.

I should hasten to add that the name of Kelso’s Potato Day, one of the oldest and busiest in the country, has nothing to do with local ground conditions. The event is organised by the Borders Organic Garden and enables visitors to choose seed potatoes, in small quantities, from an enormous selection of different varieties.

My own favourite, introduced to Scotland in  1907, is the Kerr’s Pink. The plants tend to get very tall, so they’re best grown on a sheltered site. The potatoes have a floury texture which makes them perfect for roasting – which also happens to be the best way to bring out the full nuttiness of their flavour. 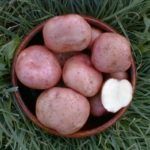 Kerr’s Pink potatoes are good for keeping because they have a low water content, unlike the track at the racecourse – which was covered in a foot of snow only a few days ago. Much of that snow has melted now, leaving the official going description as ‘Heavy’.

That would be fine for horses like Bristol De Mai, one of the finest steeplechasers in the country, and Seeyouatmidnight, one of Scotland’s main hopes for this year’s Aintree Grand National. However, further rain on Saturday could threaten the meeting once again; we’ve therefore announced a precautionary inspection for 10.00 am on Saturday morning.

The dedicated team of ground-staff are doing everything that they can to maximise the chances of racing going ahead and we remain optimistic. If we fail, we won’t consider planting potatoes on the track just yet – there are further great races planned at Kelso between now and the end of May.

In the meantime, the most prestigious race-meeting of the calendar commences at Cheltenham on Tuesday. A number of recent Kelso winners will be going there with chances – but more of that next week. This week’s selection won a juvenile hurdle at Cartmel, back in August 2014, and I’ve been expecting him to win a big race ever since.

Trainer Dr Richard Newland is renowned for his patience, which I believe will be rewarded if Vosne Romanee makes the cut for the Close Brothers Novices Handicap Chase on Tuesday – because, quite apart from the most delicious roast potatoes, good things do come to those who wait…