Once upon a time there was a group of monks. Sent forth from the Augustinian Priory of Bradenstoke in Wiltshire, the monks were tasked with finding a new location for a Priory in the North West of England.

Having selected a site on top of a hill with magnificent views, one of the monks heard a mysterious voice saying “Not there, but in a valley, between two rivers, where one runs north and the other runs south.” So the monks resumed their search for a site and found, deep in the valley, not far from the shifting sands of a large bay, an island of hard ground that was located within a marsh containing two water courses – each flowing in a different direction.

They built their Church upon the firm ground and set about draining the marshes so that productive use could be made of the surrounding land. From time to time, for a bit of light relief, instead of worshipping in the Priory the monks would entertain themselves by racing donkeys on their freshly drained parkland. It was a bit soggy and they suffered some criticism from the Bishop of York for deserting their prayers in favour of the racing.

But over a period of time, an idyllic way of life evolved – one that involved festive horseracing events a couple of times a year on the land adjacent to the atmospheric Priory that was built in a marsh in the bottom of the valley, in a part of the country where the greatest rainfall tends to descend during the months of August and September.

So if you ever wondered, as the rain buckets down ahead of the August Bank Holiday Weekend, why anyone thought it was a good idea to build a racecourse at Cartmel in the lowest part of the valley, accessed by the tiny lanes of a medieval village, the answer is that it was a magical voice, that spoke to a group of travelling monks. And praise be! Because Cartmel Racecourse is a truly magical place. 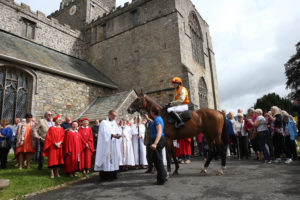 Sure, the location creates some issues: a few difficulties in preparing for large crowds of people in years (like the current one) when the rain seems incessant. The enclosures are prone to temporary flooding, but they are also extremely well drained into those twin watercourses – so they dry up quickly too. And although the surrounding lanes are narrow for vehicles, the traffic is strictly marshalled to make it easy to get in and out.

So here’s what racegoers are advised to do in order to enjoy a quintessentially British Bank Holiday experience: take your time, a picnic, some folding chairs, a waterproof sheet to lay on the ground and some appropriate footwear.

And on Sunday, why not attend the special service at 11.00am in the Priory Church of Cartmel, where thanks will be given for the local races and a horse trained by James Moffatt (who is fancied to win Saturday’s Cartmel Cup with The Steward) will be blessed in front of the porch.