The closer we get to Christmas, the more intense the festive dinners and drinks parties become. Among a host of fine venues, one location stood out this week – when a select group of the racing fraternity gathered at The Hidden Temple to celebrate Simon Ellen’s Chairmanship of Racecourse Media Group.

The Hidden Temple was a masonic meeting place, long forgotten and walled off for decades before being rediscovered during a 1990s refurbishment of the Andaz Hotel in Liverpool Street. The twelve different types of marble which adorn the walls, the plasterwork depicting the twelve sun-signs of the zodiac, the leather thrones positioned north, south, east and west, not to mention the golden organ, all add to the surreal atmosphere. 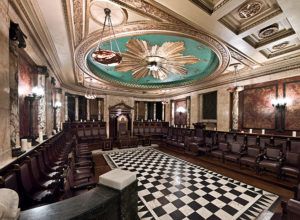 But this was not the meeting of a secret society – there were no initiation ceremonies and no one had their trouser legs rolled up. This was a meeting of people whose sole aim is to broadcast horseracing, from just over half of the British racecourses, to as wide an audience as possible. Simon Ellen, who has served for eight years on the RMG Board and is stepping down after six years as Chairman, has overseen a period of growth in the revenue returned to racecourses from £37 million back in 2011 to nearly £110 million now.

Media rights payments currently represent the largest single element of racecourse turnover – with the majority of RMG tracks being structured in such a way that all profits are reinvested back into the sport, either in the form of additional prize money or improved services and facilities.

It’s evident, however, that even across the painted ceilings of the Hidden Temple there are dark clouds on the horizon. The Government’s decision to reduce stakes on Fixed Odds Betting Terminals, starting from April next year, will impact on the number of betting shops – which will hit the value of racing’s media rights with some forecasts suggesting that racing could lose up to £40 million.

So it wasn’t particularly surprising when ARC, the racecourse group which controls a large number of the tracks which aren’t part of RMG, announced that they’d have to implement a reduction in prize funds later in 2019. Reaction from racehorse owners and trainers was immediate and fairly vitriolic. But while ARC’s racecourses will have a different set of deals with the betting industry, to those struck by RMG, all British racecourses are essentially sitting in a similar boat.

The reaction of the Horsemen is based on a fundamental misunderstanding – that racecourses are somehow making piles of cash which is not being used for the benefit of the industry. The truth is that very little money ever leaves the racing industry through racecourses – dividends from racecourse companies are exceptionally rare.

RMG and other media rights holders have successfully generated hundreds of millions of pounds in recent years – most of which has been spent on improved prize money and better facilities for owners with runners. But no matter how much money racecourses generate, it seems unlikely ever to be enough – because, should we be fortunate enough to get close, the value of bloodstock will rise together with the expectations of racing’s stakeholders. Which is not to say that we won’t continue to try!

No one knows what the full impact of the Government’s legislation will be. ARC’s announcement may yet prove to be premature – it’s notable that the Jockey Club has committed to maintain its contributions for now, but has reserved the right to cut prize money if circumstances necessitate. We’re in a similar position at Kelso, where (according to Owner & Breeder Magazine) we offer the eighth best prize money of all British jumps tracks. If media revenue drops significantly then the expected development of our race-programme may be temporarily defeated.

That shouldn’t take away from the great strides made by all racecourses in recent years. And readers of this blog will be well-used to the concept of defeated expectation (this week’s tip is Testify in the Tommy Whittle Steeplechase at Haydock).

In the meantime, I need to check to see if we’ve kept anything up our sleeves to maintain prize funds – or possibly up my rolled-up trouser leg.