We like to talk about the romance of the turf: a sport woven from fanciful dreams that, for many in the Northern Hemisphere, start each year on 14th February. Because Valentine’s Day is the first day of the Thoroughbred mating season, the optimum time to coordinate a meeting between a mare and stallion if you want to breed a foal that’s born soon after 1st January – the official birthday of all Thoroughbreds.

Of course 14th February is an important date for racegoers too. I’m sure there’ll be hundreds of starry-eyed young couples drifting through the public enclosures at Catterick on Monday, where the first race is the appropriately named “Love Racing Handicap Hurdle” (a qualifier for the two-and-a-half mile Go North Series Final which will be staged at Kelso on 26th March).

Love racing! What is this blog, I wonder, if not a weekly love letter to the most romantic sporting venue of all? 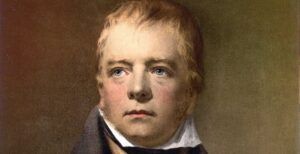 But I’m not the first to write about Kelso’s claim as the epicentre of the romantic world. Sir Walter Scott, no less, once called Kelso, “The most beautiful, if not the most romantic village in Scotland.” And he should know, because the father of romantic writing once had his tender young heart shattered into tiny little pieces while living nearby. He was sixteen years old; her name was Jessie; he wrote her poems.

Lassie, can you love me weel
Ask your heart and answer true
Doth that gentle bosom feel
Love for one who loveth you?”

The answer was no. His amorous advances rebuffed, Scott resorted to yet more poetry:

To Roxburgh’s crumbling walls I hie
Or to the ruined Abbey fly
Seeking mid relics of the past
The pleasures they once round me cast
But monuments of days of yore,
I find can int’rest me no more.
The more I seek the more I see,
The more I long to be with thee.

The story of Scott’s first love is told in a short film, posted online (click here) this weekend by Visit Kelso – a local business collective who would love you to love Kelso as much as Scott and the rest of us. And while the romantic relics of the Abbey failed to console Scott in his love-struck need, we should remember that this was still 35 years before the racecourse opened. Had he been around today, he’d have had the consolation of knowing that there’d be racing on Friday.

And in the meantime, there’s always Ladbrokes in Woodmarket Street. This week’s selection is Sky Pirate in the Game Spirit Chase at Newbury.