Civilisation, it has been said, came about as a result of over-productive farmers.

First there were hunter-gatherers who fended for themselves around the globe (except, of course, the earth was flat in those days). And then people started growing things – fancy grasses that resembled early varieties of barley, courgettes and stuff.

It wouldn’t have taken long for someone to forget to harvest the courgettes, grow a giant marrow and wonder “What the hell am I going to do with this?”

Or, for that matter, to let the barley get wet, allow it to bubble and fizz for a few days and create the first beer. They’ll have soon discovered exactly what to do with that.

Pretty soon they were trading: “I’ll give you three marrows for a goblet of Belhaven Best please.” And then soon after that someone will have thought, “If I carve some decorative goblets, I can trade them for ale and marrows and I’ll never be forced to forage for food again.” 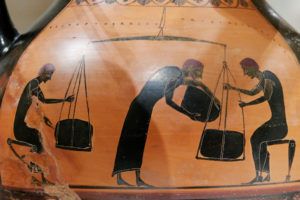 Groups of craftsmen will have huddled together, because there’s nothing like a cartel for bumping up the value of your goblets, and before you know it small settlements were formed: clusters of businesses complete with ale houses, restaurants (churning out trendy spirals of courgette spaghetti) and gift shops displaying the finest carved goblets and plates. Hey presto: civilisation!

It won’t have taken long for the first service industries to appear: prostitution, banking and legal advice (although banks have since departed the streets) – by which time it will have been necessary to replace marrows with something more convenient to be used as currency. The first miners dug metal-ore from the ground, smelted it and hammered out coins.

Once civilisation was born, people didn’t just work all day – they invented leisure time too. Among the more sophisticated forms of leisure, horseracing took an early lead. Not only did people bunk off work to watch horses racing around a field, but some of them also bought horses that were specially bred to gallop faster than the typical ones used for ploughing fields and delivering goods. Those that couldn’t afford to buy a horse used the newly minted metal coins as gambling chips (this week I’m putting mine on Hydroplane in the Edinburgh Cup at Musselburgh).

So it was that horseracing established itself at the very pinnacle of civilisation. The sport now represents (in my book) the very best of human endeavour and all human life can be found at your local racecourse – a space which has become a fulcrum for economic activity.

Horseracing is great for entertaining customers, trading (business services as well as marrows) and drinking beer – the very activities that formed the basis of civilisation. Once those over-productive farmers have safely gathered in their harvests, they’ll be able to take a well earned holiday and we’ll welcome them too.