Despite last week’s winning selection, readers of this blog might feel that my approach to tipping is a little bit slip-shod: that the logic behind the selections is wishy washy. Importantly, though, the logic is never washy wishy and my shod has never slipped.

Bookmakers occasionally still use tic-tac to communicate the odds in the betting ring, especially if the favourites are flip-flopping. But they’ve never used tac-tic to warn that the favourites have flop-flipped. 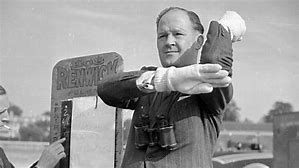 The reason for this was the subject of a radio programme earlier in the week, that was broadcasting as rain lashed the racecourse enclosures: splish splash splosh.

Mark Forsyth, the author of a book called The Elements of Eloquence, explained that the rain never falls ‘splosh splash splish’ because there is a specific order for words in the English language that share the same consonants while being formed from different vowel sounds. It has to be I A O; anything else would be a mish mash and most definitely not a mash mish.

But that’s not the only rule that governs word order. A commentator can describe the winner of a horserace as a lovely big old-fashioned Irish steeplechaser, but he wouldn’t last long in his chosen occupation if he referred to Irish old-fashioned big lovely steeplechasers – because that would be gibberish.

According to Forsyth, the rule of thumb for the order of adjectives is: opinion-size-age-shape-colour-origin-material-purpose Noun. Which is why the horses that I bet on aren’t fat slow imported brown little French young geldings. Although you could argue that they could be called anything you like – given the typically low return on investment.

So, despite my instinctive love for confusion, it’s apparent that there has to be an established order for everything: from the words in the formbook, to the numbers of the horses listed in the race programme. And race fixtures are no different. The Grand National follows the Cheltenham Festival every year, the Derby follows the Guineas and Cartmel’s August Bank Holiday Meeting follows Cartmel’s BBQ July Meeting (strangely enough).

The 2020 fixture list was published this week and, despite containing twenty fewer British fixtures than last year, it contains a consistent fifteen fixtures for Kelso Racecourse. But, as a result of a quirk in the system, one of the fixtures has migrated from the Autumn to the Spring. Which means that the 2019/20 racing season at Kelso will consist of sixteen dates – the most that we’ve ever staged.

Given that the result is more racing at Kelso during the next nine months, I hope everyone will be able to tolerate a few minor alterations to the general order of things. Sequences can change. Maybe it’s even possible that I can select a winner in two consecutive weeks… This Saturday I’m going to back Forever A Lady at Ayr Racecourse’s evening meeting.

It’s as easy as that: Bish Bash Bosh. Unless of course it’s a mash mish.