I’ve just been down to the bookies in order to play on a FOBT. That’s right, one of the devil’s machines that, according to the popular press, allows punters to lose up to £100 every 20 seconds.

I approached the machine, a Fixed Odds Betting Terminal, with trepidation. After all, they’ve been nicknamed the ‘crack cocaine of gambling’ on the basis that they’re addictive and it’s possible to lose £1,000 in less than a minute and a half. Only I haven’t got a thousand pounds to lose and it takes me at least two minutes to locate the button which switches off the bright yellow ‘Gamble Aware’ notice.

Once past the yellow screen and the next one which features a large pirate (a reference to the bookmaker perhaps), I insert a tenner – to see how quickly I can lose it. After two ‘spins’ of the animated roulette wheel I’m £2 up. After five spins I’m up £3 but I’m getting a bit bored. I’ve spent about five minutes looking at a screen and pressing buttons – I can do that at work.

By the time I’ve endured ten spins, I’ve had enough. I’m two pounds ahead and I’m wondering if I’m ever going to lose the cash – so I stop. Heading along the street, I augment the £2 that I’ve won with a further fifty pence to buy my daughter a copy of the Beano, a publication which features neglected kids, a man who dresses up as a banana and a vampire family. No wonder people say that FOBTs are eroding the very fabric of our society.

A mathematician would tell you that the odds on the FOBT roulette game ensure that, over time, punters lose about three pence for every pound that they risk. The longer a person plays, the more times they’ll risk their pound and the more money they’ll lose. The sad thing about walking out with a £2 profit is that the person that followed me, if they played in a similar way for about half an hour, probably lost a fiver instead of £3.

There’s an argument to say that anyone who puts their hard-earned cash into a gambling machine, especially one that’s programmed to pay out £97 for every £100 inserted, needs their head testing. But in the 1970’s we used to put money into Space Invaders terminals without expecting any form of dividend. Each to their own. 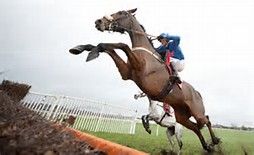 Personally I prefer to lose my money by betting on horses, an activity which I like to think of as the ‘malt whisky of gambling’. Sure, if overdone, it can end in a headache – but enjoyed in moderation, there’s nuance and spice aplenty. And while the odds are still stacked in favour of the bookmaker, horseracing punters can kid themselves that correctly identifying the winner is a matter of great skill and intellect.

Plus, rather than spinning the wheel every 20 seconds, a single ante-post punt on Pingshou for the Champion Hurdle could keep me amused for the next 20 weeks. His stable-mate, Cue Card, is this week’s selection in the Charlie Hall Chase at Wetherby.