I’m not sure that it’s a coincidence. Much of Britain has been plunged into a Narnia-like perpetual Winter following a closed meeting, on Tuesday, at which East Lothian Council unilaterally decided to replace the Musselburgh Joint Racing Committee with a new structure, which effectively puts the racecourse under direct council control.

The racecourse staff were notified that they would become council employees and, almost immediately, Scotland was brought to a standstill by cold winds, ice and snow.

I could be jumping to conclusions, but I have a horrible feeling that we might not see green grass again, or the budding blooms of Spring, until Aslan the Lion appears at Musselburgh Racecourse and banishes the White Witch – or whoever it was that brought about the wintry weather. Quite apart from the future of racing in Scotland, the survival of small woodland creatures is at stake: the local rat population has become so desperate that they have started eating the tops of the wellington boots which I, unwisely, left outside my front door last night. 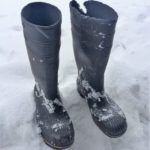 Of course it isn’t fair to suggest that everything the White Witch of the Council does is bad. The Highway Department’s snow ploughs have been performing an amazing job on the roads during the past few days and I understand that the enchanted Turkish Delight is extremely delicious.

But when councils run racecourses, they are at a disadvantage. Decisions about prize money for horseraces and proposed investments in new betting enterprises are not easily governed by public procurement policies. And few committees of laypeople, of my experience, are fully able to understand and exploit the mechanism of racing’s complex fixture funding arrangements – still less react to the tight decision making deadlines required by fixture auctions or applications to stage replacement fixtures.

When the former Provost of Musselburgh, Pat O’Brien, helped to form MJRC more than thirty years ago, his collegiate approach harnessed the power of the local authority with the experience of racing professionals from the Lothian Racing Syndicate. The result was an entrepreneurial spirit which led to significant investment and the development of a first class management team.

By contrast, the current crop of Councillors have made reassuring statements about consulting with the ‘valued’ racecourse employees, while attempting to undermine the Racecourse Chief Executive and refusing to allow public scrutiny of their controversial decision making process. Their behaviour has succeeded in fuelling anxiety among racecourse staff and concern among racing professionals.

The BHA has issued Musselburgh Racecourse with only a temporary licence to stage racing. For the want of good communication and a failure to recognise the potential shortcomings of the Council’s structure, when it comes to running racecourses, the track’s future is at risk.

It’s a sad situation. And, to cap it all, the chilly disposition of the council has led to an atmospheric freeze which has impacted us all. I’m therefore waiting for the appearance of Aslan, who may take the form of a sensible judge or arbiter from the Scottish Parliament, in the hope that the lion will deliver us from the predation of the council’s White Witch as soon as possible. Perhaps then the ice will thaw and the rats will stop eating my boots.

In the meantime, all turf racing has been abandoned, so this weekend’s selection is Humbert on the all-weather surface at Lingfield. Enjoy the snow; but if you meet any tall glamorous women bearing gifts, don’t eat the Turkish Delight.