They say that the grass is always greener on the other side of the fence, but that’s not strictly true. The grass on the track at Kelso has been lovingly tended so that it is now a dark shade of ‘ICI’ green.

The track, the stable yard, the interior of the Parade Ring and the Weighing Room form part of the racecourse that we shall be calling the Green Zone for several months to come.

The Green Zone is the working area for everyone that is essential to the staging of racing – the travelling circus which moves from venue to venue, day after day. It will be restricted to stable staff, racehorse trainers, BHA officials, vets, doctors and members of our own grounds-team. 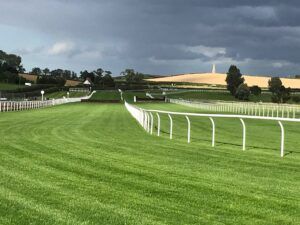 When we host our first fixture of the season, on Wednesday evening 16th September, we are really optimistic (but not yet certain) that we shall be able to admit Annual Members of the racecourse too. It’s an auspicious date to launch a new phase in the relaxation of lockdown – 400 years to the day that the Mayflower set sail for America and 28 years since Black Wednesday, the day when the British Government spent £3.3 billion crashing out of the European Exchange Rate Mechanism.

We hope that the raceday isn’t going to cost anyone quite so much money, even though the sum pales into insignificance when compared to the money spent implementing lockdown in the first place. We recommend that the Chancellor puts a billion or two on this weekend’s selection, Crooks Peak at Stratford, in order to recoup some of his losses.

Whether we can or whether we can’t admit members of the public depends upon the approval of the racecourse’s Covid Operational Plan by the Scottish Government and other local authorities.

Our plans, which include a strict separation between the Green Zone and the public enclosures, are now at an advanced stage. They have developed in such a way that complies with all the new regulations and, crucially, would allow us to revert back to staging racing without a crowd in the event that the Government was obliged to implement more restrictive conditions once again.

The plans will throw up some perceived inconsistencies. It is inevitable that there will be some people working in the Green Zone who may (at a different time of day) have close contact with friends or relatives who are restricted to the public enclosure. While this may seem a bit silly on an individual basis, we are asking everyone to stick with us and abide by the guidance, because failure to do so could jeopardise not just the staging of racing at Kelso, but also the staging of racing at any racecourse anywhere in Britain.

So – no matter how green the grass appears on the other side of the fence, please follow the instructions and stay in whichever enclosure you’re allocated.