There is a green hill far away without a city wall,
Where I rode my only winner and had my first unseated fall.

On awaking this Good Friday morning, I lit a candle and spent an hour or so meditating on the meaning of Easter. I thought about the crucifixion (obviously), but also point-to-points, chocolate Easter eggs and Desert Orchid’s 1990 success in the Irish Grand National.

But mainly what I thought about was the Ashford Valley Hunt Point-to-Point. Because, in my childhood, Easter was all about the point-to-point at Charing which took place on the Saturday of the holiday weekend. When it was all over, there was a minor consolation in the knowledge that there was another point-to-point at Aldington on the Monday but, in reality, Easter’s feature event took place at Charing.

We were always starving when we arrived in the field because Good Friday was just about the only day of the year when we didn’t eat meat. The final day of the Lenten fast, Good Friday was a time for abstinence – or maybe fish pie with a crispy top and lashings of white sauce, but I didn’t much like fish pie when I was young, so when Easter Saturday dawned I was always hungry. Which was just as well because there was also always an enormous picnic.

Sadly my Aunty Caroline isn’t with us any longer, so there’s none of her Millionaire’s Shortbread either – but (rather freakily) Trish, who runs everything in the Kelso office, produced a version last weekend which was so good that it took me right back to those halcyon days. I swear that if I have ever, in my life, said anything rude, mean or in any way non-complimentary about Trish (which is unlikely because I’d be too scared), I take it back right now and plead for forgiveness. She is blessed with a deliciously rare and beautiful talent. 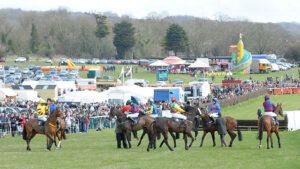 And after the picnic, there’d be racing. We’d study the horses in the roped-off parade ring and, if the bookmakers wouldn’t take our bets, we’d ask my mother or father to put them on for us – before watching the race from the roof-rack of the Bedford van which was parked on the hill.

If watching my brother and sister participate in the races was like being baptised into the religion of racing, then the magical moment when I was legged up for my first ever ride was like being confirmed. I have been worshiping at jump racing’s altar ever since.

And while that doesn’t mean that I feel compelled to follow any of the Flat racing action that is now permitted to take place on Good Friday, or even the practically heretical Jump cards on Easter Sunday, the extra days of holiday give me enough time to contemplate both the wondrous mystery of the cross and the confoundedly difficult mystery of Monday’s Irish Grand National – in which this week’s selection is Coko Beach.