Unlike Geoff Loader I haven’t yet visited every racecourse in Britain, but I’m looking forward to doing so. Geoff, who completed a full house when attending the last meeting at Kelso was presented with a branded beanie-hat for his trouble and, to cheers from an appreciative crowd, immediately declared that Kelso Racecourse was the best of the lot. 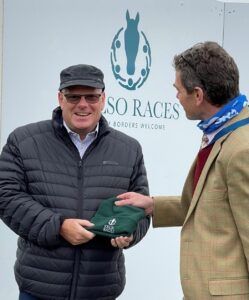 Kelso devotees are extraordinarily proud as well as friendly, so there was a risk that he could have been lynched from the top of the listed grandstand if he hadn’t come to such a generous conclusion. But on balance, he was emphatic enough to convince me that Kelso would hold a lofty position in his heart for many years to come.

One of the best things about racing in Britain is the huge variety of racecourses. Hilly ones, flat ones, rural ones, dirty-town ones and see-the-sea-view ones. I love them all. There’s something for everyone and we’ll each have our different thoughts for ranking them in order of preference.

Take, for example, the recent ‘research’ conducted by freebets.com which apparently points to Chelmsford Racecourse being the best in the country. Analysts based their decision on a complex matrix of factors including the number of races scheduled for 2022 (Chelmsford stages zillions on their all-weather surface), the average ticket price, the cost of a pint, the typical weather conditions and number of winning favourites.

Chelmsford is one of the few British racecourses that I haven’t visited yet, so far be it for me to disagree, but I suspect that one of the key criteria may also have been the ability to build sandcastles on the track.

And why not? Personally I like to see a few jumps at my racecourses, something which are sadly lacking at Chelmsford and several other places – like Epsom, Goodwood, Newmarket and Salisbury which are all honourable institutions but are limited by their Flat Racing code. You could say the same about Brighton, and yet Brighton is deliciously dishonourable, I love the seedy seaside feel, the unpredictable results and the way that the fog can roll in at any moment to obscure the racing altogether.

Fontwell Park is unquestionably the best racecourse in Britain for watching the horses jumping close-up; racegoers can sprint from one side of the tight figure-of-eight track to the other and see them jump twice on every circuit. If you’re one of those people that likes to spin around and around until you get dizzy and fall over, it’ll be a favourite of yours too. It’s a bit like that.

Redcar is the best track to go to if you like nosing around other people’s garden allotments, Pontefract is the tops if you admire flat caps, and Cartmel is number one if you really like sticky toffee pudding. No racecourse serves a better scotch egg than Ludlow.

If you want to combine a salmon fishing trip with your racing then Kelso has to be close to the top of your list, although I imagine my friends at Perth might challenge me to an arm wrestle to settle that one. And the best place to back a winner on Sunday is Carlisle, where Ahoy Senor is the week’s blog selection.