It came to pass that in the district of High Holborn, under the governance of the BHA, there came three wise persons saying: “Where are thy manners? For we have heard much evidence that thy Weighing Room culture is rancid.”

And those that dwelled in the Weighing Room rose up, protesting and saying, “It’s nothing unusual, this is how people have always behaved when you throw a bunch of competitive, young, feisty (and quite hungry) individuals into a room together after they’ve just risked their necks on the track. Besides, look at our facilities – they are but very similar to a stable, sharing as we do with a variety of animals (but that’s enough about the racecourse officials) and no real privacy. It’s totally inadequate for the modern day; what dost thou expect?” 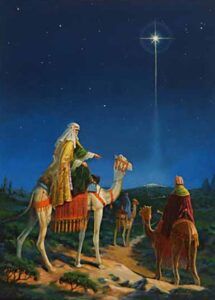 In that same region there were punters, out keeping watch over their social media feeds by telephone. And Facebook appeared to them and the screens of their tablets shone all around, and they were filled with great indignation. And suddenly there was with the Twitter a multitude of public messages saying, “You’ve missed the point. The World has moved on and it is no longer okay for jockeys to share their grievances forcibly among one another without proper process. Besides, we have taken Briony to our hearts and, verily, you are stuck in the dark ages.”

The leader at High Holborn listened to the three wise persons and said, “Okay, we have a choice. We can either go out and slaughter all the male babies in the country, or we can make an example of this case while setting new guidelines for the improved layout of Weighing Rooms. Thou shalt borrow some gold (don’t worry too much about the frankincense and myrrh) and use it for building rooms where both male and female jockeys may mix on an equal footing while also providing private spaces for changing.”

The male baby-slaughtering idea seemed a bit too radical for most, the public saying, “Let’s save that particular punishment for those that hold illegal Christmas parties in Downing Street.” And so the innkeepers brought forth their plans for better facilities, some proposing to adapt existing spaces, others (including the one at Kelso) to construct entirely new buildings.

The bookmakers, mightily relieved that they didn’t appear to be the bad guys for once said, “Hey, how come so much money is coming for Song For Someone in the International Hurdle on Saturday – could it be that the Tom Symonds’ trained gelding is the blog-selection or something?”

And everyone remembered that, being the second Saturday of Advent, the circus must be moving on to Cheltenham, where there would be much rejoicing and hopefully forgiveness, tolerance, understanding and reconciliation too.

Because it’s nearly Christmas everyone. Peace!