I’m often asked what it is that we do all Summer, given that there are more than fifteen weeks between Kelso’s final fixture in May and the start of the new season in September.

It’s a bit like asking a farmer what he does between one harvest and the next – first there’s a tidy-up, then there’s preparation for the following year: tilling, drilling and rolling; spraying, feeding, irrigating and tending. That’s without even mentioning the administrative processes of hiring, firing, counting, budgeting, purchasing, marketing and selling (as well as watching Golden Chancer, our selection for Saturday’s fixture at Perth).

Delivering a raceday is only a small part of the job – the equivalent of lambing a ewe or calving a cow. Which is not to say that it isn’t critical to get right, but each event is long in the making and starts with a gestation that’s somewhere between that of a warthog and a whale – anything from six to eighteen months.

Right now we are in the process of negotiating the fixture list for 2023. The considerations go further than simply producing a sequence of dates to promote. The length of time between each raceday, and the month in which it is run, will dictate the amount of recovery that we can expect in the condition of the turf surface. The white running rails, that we erect to delineate the course, are moved between each fixture to provide fresh running lines for the horses – so optimum spacing of fixtures can help us to optimise the conditions for racing.

Needless to say, the wider the space available on the track, the greater scope there is to vary the running lines – which is why we’ve just started our latest Summer project, for which we’ve enlisted the assistance of a huge digger… 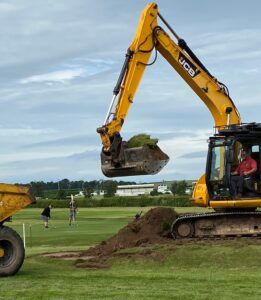 The bend out of the back-straight of the steeplechase course is tighter than we’d like and is prone to getting chopped up as the horses seek purchase with their hooves to change direction. So we were delighted when the Golf Club, located in the centre of the racecourse, gave us permission to build them a new golf-tee and to dig up the existing third tee which nestles right in the apex of the bend.

By realigning the track, not only can we accommodate more rail movements, but we’ll also produce a smoother curve for the horses to negotiate without changing their stride.

For those who wish to witness the impact of our work using What3Words, the horses will be able to follow a more gradual bend from ‘magical.windmill.fires’ through ‘colleague.hushed.punters’, which sounds a lot better than pivoting around a point at ‘baseless.imitate.whirlpool’.