We’ve enjoyed a beautiful Summer here in the Scottish Borders. The laws of probability suggest that it can’t last – so if you’re part of the 99.83% of the UK population that hasn’t been locked down here for the past couple of months, I’m sorry that you missed it.

This week, while walking the track at Kelso, I took a detour, crossed the road and scrambled around the headland of a field to reach the Thomson Monument. Erected to celebrate the life of the poet who wrote the words to (among other things) ‘Rule, Britannia!’ and ‘The Seasons’, the monument overlooks the racecourse from the top of a small hill which offers grand views across the Borders – from the Eildon Hills, to the Cheviot and further still. Landmarks stand out, like pages in a pop-up book, across the countryside – the racecourse being just one of many sparking jewels amidst a magnificent display. 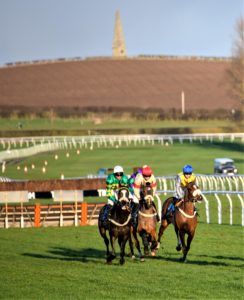 Racing in the shadow of the Thomson monument

The Scottish Borders is a pretty large region and with only 114 thousand people, social distancing hasn’t been much of a challenge. If each person were allocated an equal proportion of the land for isolation, they could encamp themselves in the middle of 41,508 square metres – just over ten acres. Each family of five could have a small farm.

Despite occasionally envying the world of cultural opportunity that exists for my city-dwelling cousins, there is no doubt that country-dwellers have had the best of lockdown. It seems almost selfish to have hoarded so much space to ourselves.

A few rural households have expanded during lockdown to include stragglers such as stranded international students, government advisors(!) and the boyfriends or girlfriends of children who would be lovelorn if separated by Covid-19. But natural law states that visitors, like fish, go off after three days – so many of those stays are now ten-weeks past their sell-by date and the Government is relaxing the rules only just in time to avoid a rash of unpleasant murder cases.

Many more UK residents are looking forward to venturing further afield during the weeks and months to come. And as most children won’t return to school until August, it must be hoped that accommodation providers may be permitted to welcome a few of them as the lockdown rules are gradually relaxed.

Horseracing returns without crowds at Newcastle on Monday (where our selection for the first race is the Brian Ellison trained Ghadbbann) and the first fixture in Scotland should take place, all being well, at Ayr on 22nd June. We are looking forward to racing again at Kelso in September when, maybe, we’ll be allowed to welcome racegoers too. Few things would give greater pleasure than the ability to share this wonderful space with visitors once more.