There’s a sprinkle of stardust scattered across the Cotswolds and I’m not talking about the Winchcombe Meteorite (which would have been a great name for a racehorse if only it’d been two characters shorter).

It’s the same celestial glow that appears every year at about this time: the shimmering sparks of hope and expectation that spread in anticipation of next week’s Cheltenham Festival.

Scientists speculate that the smattering of space dust that stained a nearby driveway will keep them occupied for a decade, but that’s only a fraction of the analysis stimulated by events at the racecourse. In fifty years’ time, form students will still be debating the relative merits of equine gods, such as Golden Miller, Cottage Rake, Arkle and Best Mate – each of whom bagged better than a brace of Gold Cups. Maybe Al Boum Photo will join their illustrious ranks on Friday, or maybe Native River will become only the second horse, after Kauto Star, to regain the blue riband having won and lost it in previous years. 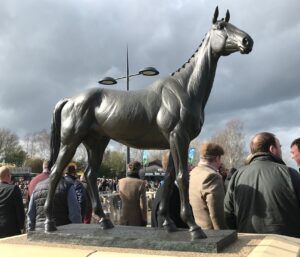 While they say that the samples of carbonaceous chondrite, formed 4.6 billion years ago in the vastness of space, will yield fresh insights into the birth of the planets, they are unlikely to tell us anything about the meaning of life. No, if it’s the soul that you seek, better to gaze upon the horses as they parade before the Champion Hurdle and feel the thud of their feet as they beat out the rhythm of your heart on their way to the start.

And if you want to understand the quirky uncertainty of fate, put a few quid on Not So Sleepy (this week’s selection) and try guessing, from second to second, whether he’s going to start the race, soar over the hurdles, or gallop right past them. He’s 66/1 for a reason, but it’s not because he lacks talent.

Other horses to look out for include The Shunter, who holds entries in no less than five of the Festival’s handicap races and will pick up a bonus of £100,000 if he wins one of them, having taken the bet365 Morebattle Hurdle at Kelso last week.

Like the sample of space dust studiously swept from the streets of Winchcombe, there’ll be a small speck of additional mass that marginally dilutes the magic. This minor impurity, in the most spectacular of racing’s rainbows, is caused by the proliferation of races since 2005 when the Festival expanded from three days to four.

Don’t get me wrong, there isn’t a race staged at the Festival that wouldn’t maintain my full attention even if my armchair caught fire. But some of the newer events, like the two-and-half mile Ryanair Chase and Marsh Novices Chase, divert horses that deserve to be pitted against the very best two-mile and three-mile chasers. While these additional races weaken the true championship events, they do generate incremental income which racing needs right now and, of course, they create more happy winning owners too.

So, even if some of the stars don’t burn quite so brightly as they once did, we should be grateful that there are at least more of them to wish upon – and more wishes to come true.